A review of his album 'Feather and Stone' 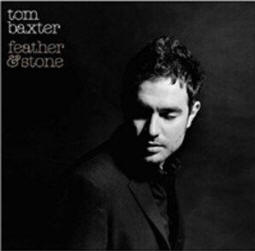 Review Snapshot:
Despite what you may have heard, Tom Baxter is not the next Jeff Buckley. Although be assured that he might well be the next big thing on the singer/songwriter circuit. He reels the listener in with soft melody, soothes them with his enrapturing vocals and comforts them with with his poetically personal lyrics.

Full review:
From being reared by musical parents to studying in London's Music College to playing gigs at night in places where he worked as a painter/decorator during the day, Tom Baxter was always destined for a career in music.

It has been said that the record company (Columbia) who signed him is grooming Baxter to be the next Jeff Buckley. The comparisons with Buckley are evident in his sound with songs that fall into that niche of tortured soul with an angelic voice. But he has something different that makes his songs unique. From the opener, 'My Declaration' with its lyrics of responsibility right through to the closing 'Scorpio Boy', this is an album that tugs at the emotions and buries itself right next to the senses. The same glare of sincerity sparkles on the harmonious 'This Boy' with its inner message of standing up to life, the captivating 'Girl From The Hills' and the wandering melody of 'All Comes True'. Although Baxter's talent really reveals itself in the standout tracks 'A Day In Verona', 'Almost There' and 'The Moon & Me'.

While songwriters like Billy Joel, Elliott Smith and even Damien Rice can capture the purity of heartache and isolation in their songs, Baxter seems to offer that little bit more. He reels the listener in with the soft melody, soothes them with his enrapturing vocals and comforts them with his poetically personal lyrics. Honesty drips from these songs and they get right under the skin to beat with every beat of the heart. Tingling the spine, teasing the emotions and making sense of empty / confused feelings, these songs transform into a best friend's advice.

With hand drawn lyrics on the inner booklet, a collage of photo's and ten beautifully structured songs, this is a truly personal debut album. According to Baxter himself, it is 'a kind of document of a young man's struggle into adulthood'. It is such a treat to discover artists like this who can really connect with the listener and provide something special. If he keeps up the same momentum then he could well establish himself as one of the best singer-songwriters around.