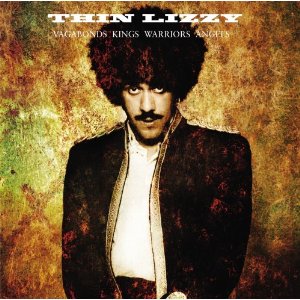 Only a huge hit single in the mid-'70s saves Thin Lizzy from complete under-appreciation in the annals of seventies rock, the days which made the genre. 'The Boys Are Back in Town' was that single and has been re-interpreted umpteen times since by monster-mogul rock bands trying to recreate some of the balls and bravado which Lizzy became known for in the rock world. Perhaps the latest release of Lizzy material, "Vagabonds, Kings, Warriors, Angels" will help rectify the situation. Four CDs and a well-illustrated book make up the release, the largest such gathering of Lizzy material yet.

Ever beloved among the rock and heavy metal communities, with a passionately devoted motley of defenders (check out the plethora of Lizzy tribute bands and websites), Lizzy was formed in the late '60s by the Crumlin Cowboy, singer/songwriter/bassist Phil Lynott. Lynott stuck out in his home town, being one of the very few working class black youths about the pebble-dashed terraces of Crumlin, Dublin. Lynott it would appear graduated from the same school for lyricists as Bruce Springsteen, producing odes to romanticized working-class heroes. Cars, girls, cowboys and highways would feature large in early Lynott lyrics but, like Springsteen, he'd later dig into a social conscience and an acute consciousness of race.

Lynott was the charismatic, tall and good looking front to the Lizzy machine but the band's success was guaranteed by some great players. Never an instrumental genius himself, Lynott's soulful vocals were oiled by the the ferocious, twin-lead guitar attack by guitarists Brian Robertson and Scott Gorham. The songs on this collection feature the various figures who one time or another partnered Gorham after Robertson left: Gary Moore is the best known of these and one can see why when he plays and sings alongside Lynott on the slow-burning ballad 'Still In Love With You'. Brian Downey, meanwhile was the powerful and stylish drummer driving the Lizzy engine. It was a tight machine, well oiled and working well by the time 'The Boys Are Back In Town' saw the day, with the smell of an absolute monster off it.

Lynott turned out songs at a prodigious rate so that after the 1975 release of 'Fighting' the band was producing an album almost every year. 'Boys Are Back...' came off the Jailbreak album, an album which in particular drops clues as to the Lizzy formula for success. With power chords and that populist Springsteenesque blue collar credibility, the sensibilities of the songs are just right to create the made-for-radio tunes which would guarantee the Lizzy crew decades of new fans alongside healthy industry and press attention.

Lynott, the black man, was an anomaly in the Waspish world of hard rock. Much of his work was thus fed by a sense of alienation, a feeling felt by an idol of his, Jimmy Hendrix. Lynott suffused his songs with images of the lone ranger, the romantic guy coming from the other side of the tracks, the jailbreaker, the downtrodden underdog. A genuinely artistic nature and a huge capacity to observe were what fed his flighty lyrical impulses and wishes for literary significance that didn't often work out. But watching Lynott open a show or charm a talk show host and audience makes you forgive him any pretensions. Here was a talented big man, a soft-spoken rogue, a terrific live performer. Lynott and Lizzy never again enjoyed the commercial success of 'Boys Are Back?' but what this collection proves is that he did put together a body of work which, in lyrical and melodic quality, surpassed his contemporaries.

Thin Lizzy called it a day in the early 1980s. Their old-school brand of lushly harmonic rock was the b?e-noir of the post-punk movement that had by then stormed the castle. 'Cruising In the Lizzy Mobile' was too symptomatic of the old-school seventies to be tolerated by the vulgar fury of Anarchy In the UK and all those who followed. Lynott made room for the new breed without any rancour. He supported the punk movement but couldn't hold pace, preferring to record solo records that delved into the deep pits of class and race.

What followed is the sadly-documented history and expectations of what might have been: Lynott died from drug abuse in 1986 at the age of 35. Sadly, one the best songs recorded before his death, and included here, was 'King's Call'. Premonition perhaps but happily, Ireland's first rock royal has solidified a fan base and an admiration that will endure. Covers of Lizzy songs by today's rock hierarchy have helped preserve and refresh Lizzy's material for the influential rock & roll it is. This lavishly produced and packaged collection leaves no excuses to those wondering why many believe Thin Lizzy deserve more attention.