A review of their (re-mastered, reissued) debut album 'My Generation' 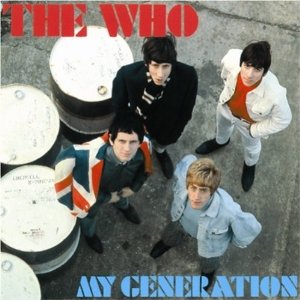 The record company caught on. After years of bootleg "original mono masters," we're finally treated to the original debut album from The Who mixed in stereo for the first time by original producer Shel Talmy. The sound quality is superb and the packaging is lavish, the band obviously aiming to put the bootleggers distinctively out of business. More space could perhaps been given to track-by-track explanations in place of the black and white shots and reminiscences. That said, this is a new booklet with many rare photos and a well-written history of the album's recording by Andy Neill (co-author of 'Anyway Anyhow Anywhere: The Complete Chronicle of the Who 1958-1978').

This was the Who's first album and the roaring - raging quartet, of which only two now sadly remain alive - sounds very formative and young here. The band heard on "Who's Next", "Live at Leeds", and "Quadrophenia" is a very different animal. But the Mod-fueled, American R&B-inspired sense of ambitious pop that powers "A Quick One", "Sell Out", and even "Tommy" is quickly distinguishable.

Disc one is a stereo remaster of the original "My Generation". Some overdubs are missing on four or five of the classic Townshend tracks, making songs like "A Legal Matter", "My Generation", "La-La-La Lies", and "Circles") sound worse than the old mono tracks, with guitar sections, horns, and background singers de-emphasized or cut, some of the old tapes having unfortunately been lost. A fanatic Who fan since explained to me that when the band originally mixed the three-track master tapes down to mono, the overdubs were done as it was being mixed down, meaning they're absent on the three-track tapes.

Disc two of the album is made up of additional bonus tracks. Some gems have been included on recent remasters of Who albums like "The Who Sell Out" and "A Quick One" but fans may not be so impressed by the extra-value content on this release. Many of the bonus tracks here are covers and adaptations of Motown and blues hits, including some James Brown numbers which Roger Daltry tackles in an adolescent kind of way, not yet possessed of the confidence he'd gain when the band moved to the US. Standouts here are "Instant Party Mixture" and the alternate vocal version of "Anyway, Anyhow, Anywhere."

The new My Generation captures the raw studio essence of The Who in 1965, but comes off as sounding unfinished. Perhaps its testimonial to how the '60s British music machine worked - it was recorded rough n' ready because the record in those days wasn't expected to have a shelf life of more than a month. Today's recording sophistactry has set that right.