A review of their EP '(Around &) Around Again' 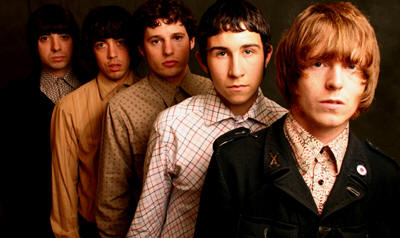 Review Snapshot:
Having played both the Oxegen and Hard Working Class Heroes Festivals in 2004, The Urges have been going from strength to strength and this three song EP is testament to that.

Full review:
Many EPs from upcoming bands come with a promise of something new and fresh sounding. However with The Urges, while their sound may not be exactly original, they firmly believe that their songs hold enough grit to entertain you again and again. And they wouldn't be far off from being wrong.

Of the three tracks on offer here, there are three separate salutes or nods (if you will) to bands that have clearly influenced them - The Kinks, The Coral and the Rolling Stones.

The title track opens with a driving guitar riff that immediately ignites a rousing tempo. That tempo is further exploited when the drums and bass quickly follow. The boisterous rhythm ebbs through for the entire two minutes and twenty seconds, and halfway through that period you might find yourself humming along. This song sums up The Urges perfectly - instantly infectious, rousing indie rock with an acute hook and a bittersweet aftertaste.

Second track 'Goodbye' sounds like Jim Walters was substituted by James Skelly (The Coral) on vocals. That psychedelic twist displays a keenness by the band to make each song different but at the same time, their own.

The lyrics play off familiar themes but it's the guitar playing that makes the song stand out - from the finger plucking intro to the combined guitar smash in the chorus. It's an enjoyable track that works well linking the Kinks-like opener and the Stones-like closer to the three-song barrage.

The closing track 'Jenny, Jenny' recalls an obsession with a girl but it is far from an acoustic lament. For just over two minutes, lead vocalist Jim Walters screams and wails as the drums and guitars provoke an atmosphere that makes you want to dance along to the riotous beat.

It would be very interesting to hear an album by this band but I think their sound would mature even more under the guidance of a good producer, someone like Ian Broudie would be well suited for them. Well worth your attention.