A review of their EP 'Vale Industrial' 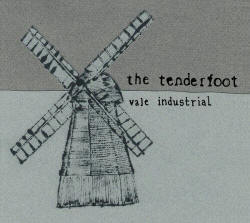 Review Snapshot:
Dug out from behind a rake of technicolour new releases, the drab-looking cardboard CD case looks uninviting, but hides a unexpected treasure.

Full review:
Buying a CD of a band you've never heard of is a true adventure: the conflict and agonised moments of indecision at the counter, the sacrifice of that classic that you never managed to add to your collection, the eventual reluctant trade of suddenly-heavy coinage for a mystery in a little plastic case. Of course it can be a disaster, some psycho-techno-alt-pop-rock-and-rolling sausage ads.

Then again it can also be a truly refreshing experience, like The Tenderfoot's Vale Industrial EP.

The obviously English quintet sound at times almost like a singer/songwriter who just caught a dose of big ideas, such is the openness and soft-spoken honesty of this CD. Opening on a strong note with 'In the Long Run', the group provide new warmth to mellow relaxi-rock and an unambiguous commentary on the suburban inertia they are almost an epitome of.

The Tenderfoot pride themselves in being off-beat, but never to the detriment of their music. Never once do they sacrifice their chiming and charming musicality on the altar of attempted or forced eccentricities.

Though indeed somewhat "off-kilter", the band should perhaps acknowledge more the influence of both their predecessors and contemporaries that is so audible. Gomez in rhythm, Doves and Leaves in vocals, the Beatles and even softer parts of the Foo Fighters in melody and harmony, and if they were Irish I would say the Frames in guitar riffs and Bell X1 with edges: The Tenderfoot are all yet none of these. Gentle but solid, Vale Industrial is a sound all their own, and a sound nothing like the images the title evokes.

Perhaps the greatest triumph of this 6-track mini-album is its obstinate refusal to fade into the background, a trait of far too many similar releases. 'In the Long Run' is probably the strongest contender for single release by being catchy and singable, but yet simultaneously sturdy and dreamy. The opening riff of 'Our Smoking Friends' is what provokes the Framesy-feeling, however there is little Hansard remaining in the airy song. Warmth is the predominant sensation emanating from the album, each track disclosing a heartfelt narrative in which we each can find something to identify with.

Unfortunately, The Tenderfoot will probably remain in the shadow of generic "The" bands, pelting out more-than-ordinary rock. They are obviously trying to please the masses, while still remaining true to what they want to play, but they lack the certain edge required. It is unjustified but remains a fact of the world.

I may not have known The Tenderfoot when I bought the Vale Industrial EP, they may never conquer the world stage in a week, but their name will be one of those that endures and slowly grows, which perhaps is better after all.