Review of their best of album '4,766 Seconds - A Short Cut To Teenage Fanclub' 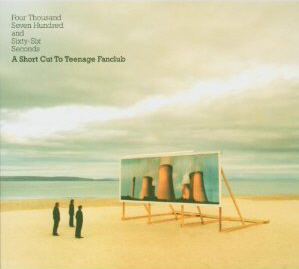 Dependable. Safe. Boring. Unoriginal. These are all words that have been unfairly tagged to Teenage Fanclub during the past 13 years. Affectionately called "The Fannies" by their loyal fanbase, Norman Blake, Gerry Love and Raymond McGinley (and various drummers) have perpetually ignored the criticism and produced great music with such consistency that they deserve so much more respect.
Opening track of this best-of collection, 'The concept', is a classic and still sounds as fresh today. This one song defines what I love about The Fannies - lazy jangling guitars, hushed lyrics of love and lost-love sung in soft Scottish accents, rolling bass-lines and melodic, addictive choruses.

The band has chosen to stray from the normal chronological order of best-of albums, instead mixing old, recent and new. From their debut album "A catholic education" right through to the recent "Howdy", a number of the most popular tunes have been plucked out for this collection. Take 'Ain't that enough' which gave the band a top 10 single and even earned them a place on Top Of The Pops. It is easy to see why. You barely notice the shimmering chorus melting into your ears, yet you find yourself humming it on the train weeks later.

The first real Teenage Fanclub song that everyone remembers would be 'Everything flows' from their debut album. This is grunge without the punk-rock element. Its definitely not my favourite Fannies song and has lost a bit of its appeal over the years, but it still remains a slacker anthem for the 90s - this song just seems to suit those days when you sit around the house vegetating, not doing anything productive, but when going to bed you can't help but think it was a damn good day!

All the singles are here - 'Star sign', 'Mellow doubt' (containing the best whistle-solo ever!), 'About you', 'Hang on', 'Neil Jung', 'Radio' etc.
But the best track appears midway through the album. 'Sparky's dream' is sheer quality. For me this is the finest pop song of the 90s. Timeless, melodic, sweet but interesting, this song should be on everyone's "Desert Island" list.

Inevitably with any best-of album, the fans are going to argue over the track listing. Personally I find it hard to believe they left off the McGinley song 'Verisimilitude' from the career-resurrecting "Grand prix" album and in particular the live favourite 'Alcoholiday'. Apart from these two glaring omissions this album is a fine collection charting the career of one of the most under-rated bands of recent times. They may never make headlines with stories of rock'n'roll debauchery or set the world alight with a new and original style, but they will hopefully make more beautiful and enchanting sing-along tunes for many more years and this album acts as a fine introduction for new fans and a gratifying collection for the fanbase.

Click for a review of Teenage Fanclub live in Belfast in January 2003.