A review of their album 'Tapes'n Tapes' 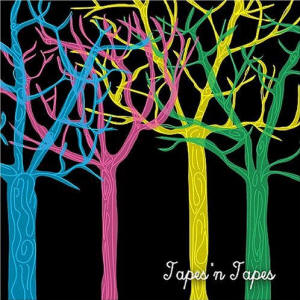 Review Snapshot:
The debut album from this Minneapolis trio represents another new name on the musical horizon becoming evermore crowded with bands taking their influences from 70's and 80's maestros. While Tapes 'n Tapes pay homage to many it manages to remain beholden to none. What's more they choose those influences well and produce a work with great but seamless variety. This is an album which grabs your attention early and holds it until the end.

Full Review:
In contrast to what their moniker might suggest, Tapes 'n Tapes make music dominated by guitars and drums. Yet the range of instrumentation evident on this, their debut album, goes far beyond the limitations of that trusted format.

The trio of Jeremy Hanson, Shawn Neary and Josh Trier hail from Minneapolis but their influences would appear to be much further flung.  The Loon opens with 'Just Drums' on which the band employ quite a few instruments to guide this number straight into the humming centre of your brain. Pavement must wonder where these guys found their 'Slanted and Enchanted' recipe. 'Insistor' jumps on a catchy polka style rhythm and rushes along, Trier sounding like a man with a hell of a lot to say. Lyrics are at times enounced clearly, at others whispered. It doesn't seem to matter either way as you find yourself shouting along with more than a little sympathy.

'Crazy Eights' holds no bars as a homage to The Pixies, complete with slightly off kilter harmonies. Things slow down in the middle of the album, Trier's voice sounding at times frighteningly like David Byrne, yet at others entirely different. Just when you were settling into the calm it's back to a more upbeat pace with 'Cowbell' and the unforgettable refrain of "I've been a better lover with your mother". The album is rounded off with a building wall of guitar and a late vocal contribution entitled 'Jakov's Suite'.

Repeated listings to this album produce ever greater numbers of reference points. However, it is the way in which these references are intertwined that makes you want to press the repeat button.