A review of their album 'Road to Rouen' 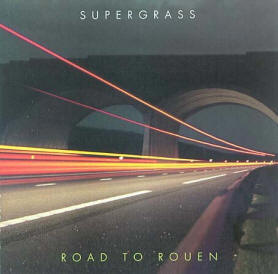 Review Snapshot: A different approach by Supergrass for sure; more mature and thoughtful but no less enjoyable and memorable for that. It's onwards and upwards for this band and their great new album.

Full Review:
Following on from last year's flawless singles compilation, Supergrass have chosen to make a record entirely free of obvious radio-hits. On hearing this news, pop lovers around the world inch towards the door and speed-dial a taxi?

Fear not, though. New album 'Road to Rouen' (despite continuing the Supergrass tradition of awful album titles and/or sleeves) is a sophisticated and accomplished record which marks a decisive step in the development of this impressive and under-rated group.

True, the concept of Gaz Coombes suddenly becoming thoughtful and contemplative is enough to cause computers to overload with confusion. However, this album builds on the dark and brooding atmospherics they hinted at with their marvellous 1997 single 'Late In The Day' or the 1999's 'Mary'. From the off, a marked world-weariness is apparent. Opening track 'Tales of Endurance' rhymes 'commercial suicide' with 'kiss of life', and this record is certainly the sound of a band pushing themselves creatively without ever losing the plot.

Lead-off single 'St Petersburg' is a bit too flimsy, though, and is probably this album's only weak link. Apart from that, be prepared to enjoy an inventive and good-humoured mix of one-part 'Rubber Soul' (check out the chiming 'Ticket To Ride'-style guitar intro to Kick In The Teeth') to three-parts 'Abbey Road'. The title track is a storming rock-out, while 'Coffee In The Pot' gets away with its dumb-fun 'Oi!' chorus. Then again, this is a band built to be enjoyed, not studied.

Tracks on 'Road to Rouen' tend to feature brief lyric verses interspersed with longer instrumental breaks. However, at no time does this record become long-winded or boring - testimony to the skilled musicianship of this group, especially Rob Coombes on piano and keyboards. Most of this record feels like the sort of pre-synthesiser Dutch prog-rock that normally soundtracks footage of Johan Cruyff Cruyff-turning hapless full-backs. This is a good thing, I assure you.

The music is warm and nostalgic without ever sounding too retro; the lyrics are bittersweet and evocative but never whining - 'Road To Rouen' is a reflective and mellow album in the same territory as 'The Hour of Bewilderbeast' by Badly Drawn Boy or 'Paris 1919' by John Cale.

It will surprise many who may dismiss them as Britpop stragglers, but Supergrass have just made one of the most enjoyable albums of 2005.