A review of their album 'Rings Around the World' 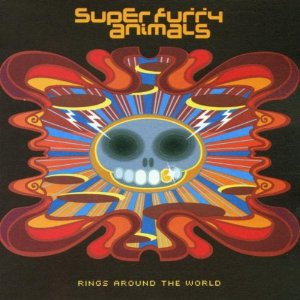 The fifth album from the extraordinary Welsh group finds them in a ludicrously ambitious quagmire. With thousands of Sony dollars behind them they have, as you do, decided to release a concept pop album on the state of the planet with some global communications thrown in for good measure. The last time this was done bands like Yes, Gong, the Peter Gabriel-led Genesis, ELP and King Crimson stalked the earth. Peter Frampton was a name to be revered and each Pink Floyd release was greeted with a huge increases in the sale of Rizla's and crisps.

But this time instead of the luxurious crackle of vinyl and rain forest-sapping gatefold album sleeves, we have DVD and 5.1 Surround Sound (whatever that is) in which to address the ills of the world. And on "Rings Around the World" there are many: from George Bush and the Death Penalty (on the country-meets-mutant-techno tomfoolery of "No Sympathy") to Peter Mandelson's moustache ("Shoot Doris Day") to mobile phones (on the Hawkwind-meets-Beach Boys style title track) to tolerating people you hate (on the superb "Juxtaposed With U").

But ambition is not always flawless and "Rings Around The World" is not without its flaws. While in scope it's a tremendous album, in execution it's patchy. It starts well with the sombre, scene setting "Alternative View From Vulcan Street" and even the supremely dodgy power chords of "Sidewalk Serfer Girl" work, but after the lifting title track with its ironic chorus ("ring ring" shouted triumphantly over the clatter of mobile ring tones), things take a turn for the worse.

"It's Not The End of the World" is a supremely annoying trudge through the worst excesses of 70s prog rock complete with Jon Anderson (Yes vocalist for those not up to speed on their prog rock history) style falsetto vocals whilst "Receptacle for the Respectable" is, quite simply, a mess. Much has been made of the presence of Sir Paul McCartney (yes, that's the Paul McCartney) on the latter track. On it, he chews carrots and celery reprising his unique vegetable percussion technique first heard on the Beach Boys "Smile"-era track "Vegetables". You also suspect he lends some backing vocal assistance, but his presence can't save what is a truly dreadful track that ends in a barrage of death metal that's comical on the first listen but that soon wears off.

When it works, as it does on the sexy instrumental "A Touch Sensitive", the religion baiting "Run Christian Run" and on recent single "Juxtaposed With U", it really does work. But sadly there's just too much going on to merit this album the classic status it so obviously strives for.

The Super Furries are a truly inventive band but they're trying to be too smart with "Rings Around The World" and in the process have created a flawed masterpiece... like all their albums really.