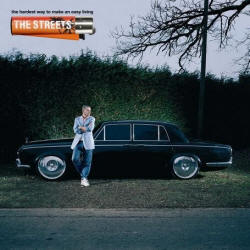 Review Snapshot:
A compelling album from a fame-hampered Mike Skinner whose coming-to-terms-with-it-all is on full display for the listener to indulge in and take note from. From when you wasn't famous to the hardest way to make an easy living, The Streets haven't let up on providing a soundtrack to, and paradigm for the living of modern life.

Full Review:
Mike Skinner is real. Whatever cards life deals him, he'll play. 'The Hardest Way To Make An Easy Living' is the third autobiographical instalment from this miraculous media-sensation that has become of The Streets. It is the simple tale of a man putting into perspective the meteoric rise to a new level of fame and infamy that has turned his life upside down and back to front.

Everyone's discussing it in terms of albums that deal with a fame-induced breakdown, and are comparing it to the whiny backlash-records of bands and artists that find themselves out of their depths and turn against their success for inflicting it all. However, Skinner's just doing what he's always done, writing about what is going on in his life, in the colloquial poetics of modern life itself?

From 'Prangin Out' ('prang' being a word Skinner wants to introduce into the dictionary, in the way that Shakespeare brought in words such as 'bump') and its lyrics revolving around snorts of tour support and dealing with feeling suicidal, to the tear-jerking 'Never Went To Church', that sees Skinner coming to terms with the recent death of his father, the album is full of deep and insightful thoughts on the big meaning, but at the same time it isn't short on banging tunes either!

As an album it's not anywhere near as linear or conceptual as 'A Grand Don't Come For Free', but there's intrinsically a reason for that, Skinner himself having not experienced a particularly linear or coherent past few years since the success of 'Dry Your Eyes' propelled the whole phenomenon into the outer stratospheres.

Alongside each other on the record are street-level, real-life anthems such as 'War of The Sexes' and the lovely sequel to 'Could Well Be In' ('All Goes Out The Window'), and then there are the fame-addled commentaries on Skinner's decline, such as 'When You Wasn't Famous' and 'Hotel Expressionism', all culminating in the triumphant 'Fake Streets Hats', the song that has Skinner facing up to the demons of his breaking-point in Amsterdam when he mistook official Streets merchandise for bootlegged gear and threw a fit.

In honesty it's an incredible stand from The Streets, an album of worth, both on the level of being extraordinarily truthful and insightful into the dark world of intrusive success, and still being as easy to relate to as 'Original Pirate Material' was, coming at a time when it could have so easily all gone down the pan, the hardest way to make an easy living.