A review of Steve Earle's album 'The Revolution Starts Now' 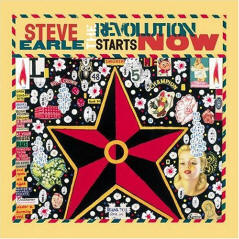 Review Snapshot:
Steve Earle's new album 'The Revolution Starts Now' is the single most important work of political song writing to emerge from America since Woody Guthrie's 'This Land Is Your Land'.

Full review:
When Abraham Lincoln stepped forward to the podium to deliver his first inaugural address as President of the United Stares in 1861 he had the following advice for the American people, "This country, with its institutions, belongs to the people who inhabit it." Lincoln, it should be remembered, was a member of the Republican Party.

One hundred and forty three years later, in a country where half the population do not vote, Steve Earle has decided to remind his fellow citizens of Lincoln's democratic credo with his album, 'The Revolution Starts Now'. In the linear notes to the record Earle observes, "Democracy is hard work. American democracy requires constant vigilance to survive and nothing short of total engagement to flourish". Earle has long been a maverick voice in American music and the fact that the title track of this album has already been licensed by Michael Moore for the upcoming DVD release of 'Fahrenheit 9/11' would suggest that he takes the same partisan approach to politics as anti Bush activists like Moore but that is not the case.

The central thesis of this record is not that Kerry equals good and Bush equals evil, rather it is that Americans of all political shadings have become supine and lazy in their attitude to democracy and the only way that America can change for the better is if all its citizens rise up off their fat behinds and get involved. As Earle sings on the title track, "Yeah the revolution starts now / In your own backyard / In your own hometown / So what you doin' standin' around?" The more I think of these words, the more I feel that they are an indirect commentary on Bruce Springsteen's recent article in The New York Times where Springsteen wrote the following, "We granted tax cuts to the richest 1 percent (corporate bigwigs, well-to-do guitar players), increasing the division of wealth that threatens to destroy our social contract with one another". Yes, the effect of those tax cuts was to increase the divide between rich and poor but they didn't come unheralded out of the void. Bush promised tax cuts during his campaign for his first term in office and, when he was elected, he made good on his promise. In other words, the time to act against those cuts was four years ago, before the damage could be done, not when their instigator was seeking a second term.

Earle's 'Revolution' is the single most important work of political song writing to emerge from America since Woody Guthrie's 'This Land Is Your Land' and the political vision he expresses in these songs is both inclusive and pro-active. As he says in the linear notes, "When the dust clears and the votes are all counted (we're watchin' YOU, Jeb) it will be up to all of us - Democrats, Republicans, Greens, and independents alike - to hold whomever is left standing accountable for their actions on our behalf every single day that they are in power." His music acts like a Hillbilly version of Uncle Sam, pointing at the listener and saying, "Your country needs you. Not once every four years but every day of your life!"

Earle's call to revolution is an uncomfortable one for those in America who prefer to sit back and do nothing. Earle not only demands that they register to vote, that they make the effort to vote each time out and that they continually lobby the people they have voted for, he also demands that they speak up at every opportunity, thus exercising their right of free speech, regardless of any fears that they might have at doing so. On the simmering metal anger of 'F the CC', Earle snarls at us, "But don't say nothin' about the president / A democracy don't work that way / I can say anything I wanna say". Later on in the song, Earle reminds us that Freedom of Speech was only enshrined in American law because of the tragic sacrifices made by the 1960s satirist Lenny Bruce, "Just don't forget your history / Dirty Lenny died so we could all be free".

Earle's contention is not that American Democracy is an unworthy ideal and the Constitution that enshrines it a worthless piece of paper. On the contrary, Earle describes the U.S. Constitution as a, "remarkable invention of our forefathers". His concern is that if people do not participate actively in the implementation of the ideals expressed in that document then eventually it, and the democracy it embodies, will crumble into dust.

I have a theory that Earle's increasing political radicalism was spurred by the time he spent living in Ireland. We, the Irish, are a fiercely political race. Americans may find the polemics of people like Al Franken and Michael Moore to be audacious but, in Ireland, such dialogue is unexceptional. If you look at Bono's success in getting funding for AIDS relief from George W. Bush what is most interesting is not that Bono used his position as a global figure to get in the door of the White House, any American superstar could have done as much, but that he treated Bush in the same way that he would have treated his local TD. I'm sure that Earle was not only startled by the way his neighbours in Galway engaged with the political process, he was also liberated by it.

Ireland's role in the politicisation of Steve Earle is made all the more relevant because the man who authored our own Constitution, the man who essentially fathered the democratic ideals of the nation we now live in, was not himself Irish but American. If any country can claim to have imported American style democracy than it is Ireland, thanks to the work of that legendary New Yorker Eamon De Valera. When President George W Bush announced the end of Major Combat Operations in Iraq in a speech he made on board the USS Abraham Lincoln in May 2003 he could almost have been speaking about Ireland in the 1920s when he remarked that, "The transition from dictatorship to democracy (in Iraq) will take time, but it is worth every effort."

Earle has stated that he created 'The Revolution Starts Now' because he wanted to have his say, as both an artist and a citizen of a democracy, in what he describes as, "The most important presidential election of our lifetime". His words are aimed directly at his fellow Americans, but in truth, they are relevant to us all. President Clinton once remarked that, "we live in an interdependent world". By that he meant that what is decided in Washington affects all people equally, regardless of whether they make their homes in Paris Texas or Paris France. The right to vote in a US election is no longer simply an aspect of national citizenship; it is the privilege of a political elite and on 'The Revolution Starts Now' Earle castigates that same elite for being neglectful of their privileges.

Most reviewers simply suggest that you buy or don't buy the record under review but I believe that this magnificent call to arms through music deserves to be heard far and wide so I ask you, the reader, to do the following. Write in to any radio stations you know of and demand that they play this record. Approach your local newspaper and offer to write an op-ed piece about the album's universal message of democracy. No, don't offer; demand that they let you write an article. Organise listening parties to play the record. Get your sound engineer to play the record though the P.A at your gigs before you take to the stage to play your own set. Do anything you can because, take it from me, music with a message really can make a difference to the world we live in.

Pass me my Fender, the revolution starts now.