A review of their album 'Iowa' 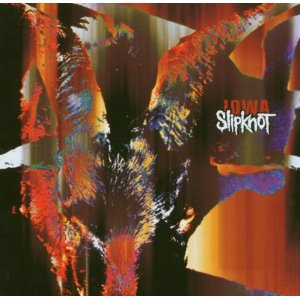 Slipknot fell into one of the traps most feared by serious "artistes", they became instantly popular and phenomenally successful. Obviously this was the aim, but they couldn't have been prepared for the waves of teeny-goths who immediately began to worship and idolise these nine masked freaks from Des Moines, Iowa.

Their self-titled debut was intended as an uncompromising slab of hatred thrown back at the world. Hatred, however, came out in convenient three minute shout-along anthems which everybody loved. So what do you do when you're not taken seriously? Well if you're Slipknot you make a record called "Iowa".

"Iowa" takes all the really nasty bits from the first album and takes out the pop appeal. It will be very hard to find a "Wait and Bleed" type single on this album, "I Am Hated" being the most likely candidate, thanks to its similarity to one of their most successful singles, "Spit It Out".

It's difficult to pick highlights from this album as each of the 14 tracks is quite astounding. Listening to this album is a scary experience as the 'Knot drag you through choruses like "If I'm 555 then you're 666/How does it feel to be a heretic" (The Heretic Anthem), drop you into seething soundscapes like the slow and menacing "Gently" and, just when you think it can't get any more disturbing, along comes the 15 minute epic title track, "Iowa"? Take a deep breath? And start the CD again.

"Iowa" is everything Slipknot promised us and so much more. Yes, it's heavier. Yes, it's nastier. And, Yes, it's got a really cool sleeve.