A review of their debut album 'Now Here Is Nowhere' 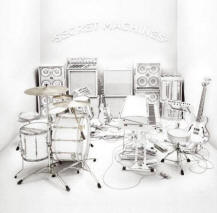 Review Snapshot:
Self-produced debut from Secret Machines, a NYC-adopted power trio. "Now Here is Nowhere" showcases a band with confidence to spare. Their music arcs back and forth between stomping, hook-laden, guitar heavy rock music to sublime, synth layered atmospheric moments. The ease at which this young Texas three-piece pull off such genre-jumping traditions suggest a band steeped in a diverse array of influences. Here is a band who have escaped being labelled by the scene-makers of the modern music industry.

Full review:
Four years ago Texas three piece Secret Machines thundered onto the music scene of their adopted New York. They served their trade throughout the city with as much gigging, writing and recording that many bands of the five boroughs would see in a lifetime. Realising that in this fateless world you create your own luck they had left their Texas homeland for the revitalised rock and roll oasis of NYC and upon arriving converted their shared loft apartment into a rehearsal studio. Now with the release of their debut, self-produced album "Now here is nowhere" (backed with the dollar bills of label giants Warner) the Secret Machines offer to subvert the genre-defining retro nostalgia that has gripped its commercial claws around the neck of current popular music. Could this Dallas outfit be the antithesis to the rock and roll fashion parade of modern guitar music? Integrity's answer to scratch-under-the-surface-and-what-do-you-find bands?

Blasting immediately into the opening track "First wave down" with the flattest drum beat this side of John Bonham country, the Secret Machines - without any hint of the contemporary subtlety - display the strength of their rock and roll convictions. Big drums, big guitar, big bass serve to assault the listener with (as the song title suggests) wave upon wave of 70s sonic rock fury. Coupled with singer Brandon Curtis' sneering "told you so" vocals treated with prog-like harmonies the song begins life as a tight, huge - yet spacious - steady-paced anthem. Then cue the slightest of rhythm changes and the song suddenly launches down a spiralling path of guitars, effects and feedback with mantra like repetition, heightening intensity and heart pounding-emotion until - BANG!!! - like the hit from an adrenaline shot, a single crack of a snare ends the song. As magnificently abrupt as when we were first introduced to these Texan chaps nine and a half minutes ago.

"Sad and lonely" continues in similar bombastic vain to its predecessor with an immense rhythm section by which a military dictator could set his watch to. Swirling guitars soon envelope the metronome like beat and distorted bass yet leave enough space for the clarity of the vocals to ring trough. It is truly not a case of production for production sake. A hurdle at which many bands would have stumbled, caught up in grandiose ideals, sacrificing elements which seem integral to them, yet Secret Machines seem to be aware of the foundation upon which their music stands.

Away from the 70s metal tone for which they are forever associated with The Secret Machines also deliver a hail of heavily spaced, slumbering songs. In tracks such as "Pharaoh's daughter" and "Leaves are gone" guitars are replaced with ethereal keyboards and analogue synths of "Dark Side of the Moon" circa Pink Floyd but to no lesser effect. Though a change of format, the songs still resonate strongly and remain huge yet uncluttered and completely necessary.

What appears to be most striking about "Now here is Nowhere" is the contrast existing between both the song writing and medium through which the imagery is conveyed. For all its abrasiveness and "heart on sleeve" loudness, the lyrics strike a chord with introvert-like imagery and at times are extremely dark and pessimistic. Indeed our introduction to Brandon Curtis' voice is met with the lyrics: "the open way is too dangerous, listen close they're watching us". Further messages of pessimism and a subversive culture are explored through tracks like "The road leads where it's led" ("collecting fall out from the blast").

On its surface "Now here is Nowhere" presents itself as a truly solid rock record owing a lot to a variety of influences and illustrates a open-minded band unwilling to be pigeon-holed. Yet despite their rock standing Secret Machines offer a view of paranoia and claustrophobia through a litany of politically charged lyrics and imagery of urban bunker warfare. Do they know something we don't?