A review of their album 'The Art of Insincerity' 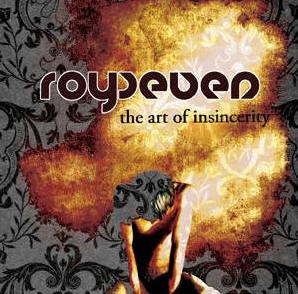 Review Snapshot:
Previously of Jove fame, Royseven managed to reach no. 6 in the charts with the single and opening album track Older. This is unsurprising: as essentially strong as the songs on this album are, nearly all their merit is buried under an overbearing production style which leaves them sounding like a hundred other bands. Overall a decent listen.

Full Review:
A band who have reached not inconsiderable heights in the heady orbits of the Irish music world, Royseven have a lot to give. And give they do - their lyrics drip with the usual emotion of major-signed indie, while their Paul Walsh pours everything he has into making them sound like they do.

The album opens with top-10 success, Older, a song that starts with a soaring vocal line over gentle acoustic but soon has you writhing around the floor in agony after a painful band kick-in at the chorus. With an accomplished and very able songwriter and some really impressive but buried keyboard, Royseven are obviously capable of so much more than such a hackneyed and cheap trick. However, the album gets increasingly better with every track, except for a small pitfall in the shape of fifth track Aberdeen.

Although second track Happy Ever Afters looks to be the follow-up single, one of the most outstanding is in fact Crash, in which Walsh lends an unexpected air of improvisation over strict and exact chordal movement, not unlike Muse's infamous Matt Bellamy freestyling over their characteristic heavy bass but without the range. 'Strict' and 'exact' are in fact words you could attach to most of the album: there is a definite emphasis on unity as a band and exactitude in performance throughout the album.

Textures which can be described as little other than rich and fat war with exposed nakedness and extreme musical anorexia in a pleasing trip of sensations. The strength of Walsh's vocals and the strength of the bare essential songwriting fight for the honour of being the most remarkable aspect of the album. A case in point is the internal struggle of February, in which immaculately constructed melodies and delicate piano are counterpointed by rough guitar and doom-laden strings in a successful, if unintentional, pastiche of classical dramatics. Meanwhile the vocals alternately roar and soar as the mood dictates with immaculate self-control.

While The Art of Insincerity is unimaginative at best, it nevertheless is a successful vehicle for showcasing the potential that is so audible from track to track.