A review of the box set "Lets Go to Work" 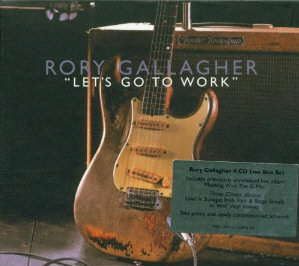 You can just about smell the froth off the Guinness, the sweat of the crowd. The compere comes to the microphone, a parish pump kind of guy, the sort who sits on all the local committees: "Ladies and Gentlemen, (pause) ... Rory Gallagher." It's Donegal, early seventies. "Good evening. Good to back home" says the singer, in his typically shy tone. What follows in the following couple of hours lacks nothing in guts, style and volume however. "Wayward Child" is followed up by "Brute Force and Ignorance." Guitars howling, footstomping blues rock and great lyrics, all jamming wonderfully. It was a simpler time, and Rory Gallagher was Ireland's big rocker. After that Donegal gig, he'd headline Ireland's first outdoor rock festival, held in a Middleton, Co Cork field.

The latest Rory Gallagher release, "Lets Go to Work," a 4-cd box set of remastered albums, catches and smartly packages the man at his best and in a setting he seemed to suit best, despite his shyness: the live stage. Talking to journalists, Gallagher regularly described himself as a guitarist who fed off the instant reaction and feedback only a live audience can provide.

Rory Gallagher lived a short life. Short but stacked full of the blues. By the time of his premature death in 1995 the Co Donegal born guitarist, singer and songwriter had put a huge back catalogue and a reputation for absolutely electric live shows to his name. Very well gotten in the blues rock world, Gallagher's reputation as a gentleman devoted to his art could explain why his name isn't today written in similarly sized capitals as that of more ambitious players of his era - the Rolling Stones after all drew on the inspiration of his talent and acknowledged Gallagher's prowess. The ego and manic ambition of the latter carried them further than stage-nervous Gallagher ever wanted to go, perhaps.

He didn't tour the States as much as he could have - for he was well received there. Rather, Gallagher
preferred the clubs, theatres and outdoor festivals of Europe. His fans were the devoted kind, Francois, Adelbert, Sven and Jose all sweated it out at no-holds-barred, marathon live shows around
Europe. Always a road-hog, Gallagher's quiet nature and hard work on stage endeared him to audiences around the world. The French so loved his marathon shows that they've named a Parisian street after him. (Afterwards red-faced Dubliners gave over a Temple Bar square to his memory.)

Gallagher's inspiration came from American blues and folk singers he heard on the radio as a youngster. Growing up in Donegal and, later, Cork city, Gallagher admired Buddy Guy, Freddie King, Albert King, Muddy Waters and John Lee Hooker. He'd go on to record with two of these artists.

The latest collection includes the classic Gallagher solo works, cleaned up and remastered. From this uber-prolific period there's "Live in Europe" (1972) and, perhaps the best of the box, "Irish Tour" from 1974, Then there's the later "Calling Card" and "Photo Finish" 1978 and 1982 releases respectively.

Gallagher's two last releases, the 1987 "Defender" and his last album, Fresh Evidence (1991) were released on the Capo/I.R.S. label. Its fitting that the label releasing the "Lets Go to Work" box set is Capo, Gallagher's own record and publishing company set up to help expose other blues musicians. Gallagher's brother Donal, also a musician, manages the label and promotes his brother's legacy today. We can imagine it was his good taste which packaged the box set, Rory's famously battered Fender guitar and Marshall amp pictured in rich tones on the cover. It's as if they've been photographed late at night after a hard-sweating show, the van being backed up to the stage door.

In one of the last interviews before his cruelly young passing away, Gallagher said of his song writing: "I try to sit down and write a Rory Gallagher song, which generally happens to be quite bluesy. I try to find different issues, different themes and different topics that haven't been covered before...I've done songs in all the different styles...train blues, drinking blues, economic blues. But I try to find a slightly different angle on all these things. The music can be very traditional, but you can sort of creep into the future with the lyrics."