A review of the album 'Tip Toe' 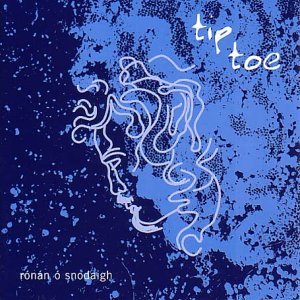 You are not likely to come across a finer album this year than "Tip Toe", the debut solo release from Kila frontman Ronan O'Snodaigh. From the very moment it begins to the closing bars of the secret hidden track at the end, "Tip Toe" is a captivating and exceptionally beautiful listen. Taking the scenic route in its journey from A to B the drive is fantastic, the conversation good and the view stunning.

The first ever solo release from a member of the superb and highly influential Kila, "Tip Toe" is as wide and varied as Kila themselves. It is classical music put to traditional music, its lyrics as lovable and evocative as the music behind them. The delivery of O'Snodaigh's words of love is unique, moving with an almost African-Irish rhythm and what makes it even more unique is that these are the first lyrics he has wrote in English! But he has a command of the English language of love that few writers could ever hope to match. Not too complex, but challenging and thoughtful at the same time, O'Snodaigh paints a poetic picture of himself as a man content. Content to let his fears ride and go with the flow.

The album is embossed with some first class playing. Aided on the project by former Dead Can Dance man Brendan Perry, jazzman Ed Kelly, Co Clare traditional player Simon O'Reilly and classical duo Cliodhna and Grainne Quinlan amongst others (Mic Christopher makes a fine cameo appearance), O'Snodaigh crafts a "plucked" soundscape where gently picked guitars combine with charango, bouzouki, double bass, brushed bodhran, fiddles and violin. Whilst it never takes off in the way that Kila specialise - that huge swirl of euphoric, natural music rising to the highest peak - the listener is thankful in the long run for the grace at which "Tip Toe" unfurls. In tune with the lyrics, it is laid back, content and lovely.

There's no need in picking out any individual song for guidelines as to why you should own this album but suffice to say the final verse of "Fisherman" says it all : "No matter how dark I am / I'm always enlightened by love / No matter how down I am / I'm always being uplifted by love". Uplifting and enlightening, "Tip Toe" is an album for anyone that has ever been in love and for anyone that wants to know just how beautiful Irish music can be.