A review of their album 'Foc' 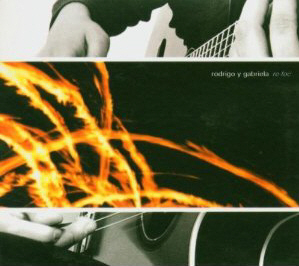 The second album from the Mexican guitar duo. Based in Dublin, their reputation has grown over 2 years of busking in Dublin, where they are now regarded as one of the city's hottest live acts. The record captures most of their current live repertoire.

Imagine, if you can, someone forcing jazz guitarist Django Reinhardt to attempt Metallica after downing a bottle of cheap Tequila at Tijuana noontime. Such is the power, and charm, of 'Foc', the debut album from guitar duo Rodrigo y Gabriela.

The names may not be familiar, but anyone who has walked through Temple Bar or down Grafton Street over the last 2 or so years has certainly encountered these two before. With two nylon-strung guitars and fever-pitch playing, they could surely claim to have been one of Dublin's most talented busking acts. So have they captured this on record?

Surprisingly, the answer is yes. Without any studio add-ons, vocals or effects, Rodrigo y Gabriela manage to coax emotions than multi-million dollar bombast can only dream of. 'Elevate me' indeed - anyone who listens to the frenetic opening hooks of 'Sangre y Ritmo' is likely to drop their U2 CD in disgust, if not amazement.

It is the simplicity of their set-up, combined with the intricacy of their playing, that has produced an act that can, as on the opener 'Foc', shift gracefully from cannon-ball percussion to graceful lullaby in seconds, between shades of metal riffery and flamenco swing. It really is that good.

But for all the dexterity of musicianship on display, all licks and tricks bow to the melody, and the melodies on display here can be mirrored with anything from Slayer to calypso, Miles to flamenco - Rodrigo's lead on '30 del Marzo' being a case in point. It's no surprise that seasoned songsmiths like Damien Rice and the Frames' Glen Hansard have invited Rodrigo y Gabriela to support at recent gigs. And at times, they must have looked over their shoulders.

Like their live performance, 'Foc' the album works better as a suite of songs played as a whole, rather than a recording with stand-outs and fillers. The material represents a musical diary of the pair's recent travels around Europe, with some of the tracks written in Holland, France and, of course, Ireland (could the overblown mess of Dublin's Temple Bar be immortalized any sweeter?)

The beauty of the music, the style it's conceived and played in, and the absence of vocal expression, ensures that, like the best of the 'classic' jazz composers, the listener projects his or her emotions onto the music. The drum of the percussion - played off Gabriela's nylons strings - may tap your foot, but the guitar breaks that follow, on the part of both individuals, produce levels of often stunning lyricism.

If you haven't investigated Latin folk, flamenco or jazz guitar before, Rodrigo y Gabriela are a wonderfully pure introduction. What's more, according to themselves they intend to spend some more time in Ireland and they're live gigs should be unmissable. Until then, beg, borrow and steal this record. Acoustic music doesn't come much better.