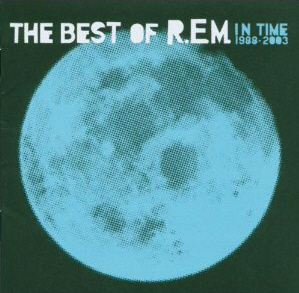 With 'In Time', Warner Brothers have added a sequel picking up where IRS' 'The Best Of REM' left off in 1987. Only this time, everyone knows who REM are. In Time is a selective history, detailing music from a subdued rock-culture to reluctant superstardom and back to the cultural side of things, albeit with an iconic status.

This chronology has its divisions. Radio-based REM fans will bemoan the absence of 'Shiny Happy People' (all things considered, a wise decision), while dedicated fans will wonder why 'Drive' has been omitted instead of 'Sidewinder'. Clearly, REM are attempting to strike a Shiny Happy medium.

The charmingly silly 'Stand' from the Green album will remind us of our younger days when disco was not controlled by endless rave and pop music, and alternative began to emerge. 'Orange Crush' is a smart move, as the song will strongly resonate given the scattershot state of today's world politics. 'It's time to show your conscience overseas' is a lyric that sits comfortably alongside the new single 'Bad Day' with its strong anti-Bush sentiments and the song itself ironically, sounds like a modern day re-make of 'It's The End Of The World As We Know It'. The other new song 'Animal' is a fuzzy over-driven exercise that fails to impress at first, but its chorus is gradually infectious.

'Out Of Time' propelled REM to superstar status yet strangely, the anthemic & brilliant Losing My Religion is its only featured track. During the mid-90s grunge rush, 'Monster' was released which for many fans, failed to capture the addictive ambience normally associated with an REM record. Perhaps they realise this in hindsight and 'What's The Frequency, Kenneth?' is the only one of 5 singles from the record that makes the compilation. Still, it's thumping beat is irresistible. The anything but commercial, 'E-Bow The Letter' was a bold choice for an opening single from 'New Adventures in Hi-Fi', but fans will admire its inclusion especially with Patti Smith's superb backing vocal. The Berry-less 'Up' album was a troubled time for the band, though you wouldn't notice it with their one true love song 'At My Most Beautiful'. Thankfully, the somewhat gloomy but majestic 'Daysleeper' from the same album also made the final cut.

Any music collector will have 'Automatic For The People' on the shelf, and many feel that this is still REM's finest hour with its unsettling, yet communicative songs. Consequently, that album is most represented with 'Sidewinder', 'Man On The Moon' and the universal feel-good 'Everybody Hurts'. 'Nightswimming' is a true gem, even though lyrics such as 'The fear of getting caught' only served to fuel the then-rumours that Michael Stipe was dying of AIDS.

'The Great Beyond' released in promotion of the Andy Kaufman movie 'Man On The Moon' bizarrely became REM's biggest selling UK single and is an obvious choice, while 'All The Right Friends' taken from the Vanilla Sky soundtrack can hardly be described as the 'Best Of REM', but it nonetheless remains an unqualified success.

It may be an over-used and annoying marketing ploy these days, but a special edition of this compilation is available with a bonus disc of b-sides and so called 'rarities'. The instrumental '2JN' lacks sparkle and an acoustic version of 'Pop Song 89' will never outdo the original. Just because they're rare doesn't necessarily make them good. On the other hand, a demo version of 'The Lifting' completely outdoes the original and a live performance of 'Turn You Inside Out' recorded from the Green Tour gives the song all the power it deserves. W.S. Burroughs provides a superbly effective vocal on 'Star Me Kitten', while 'Country Feedback' is as always, a live treat. 'The One I Love', played on acoustic guitar and piano only and sung in a different key breathes new life into the song and is a bonus in the true sense of the word. It's quite possible however, that this bonus disc may be the only selling point for long-standing fans as the choice of songs may seem obvious, and they would probably be content to wait for the new album next year.

Otherwise, 'In Time' is a chronology of music that clearly defines why REM have become one of the most gifted and respected bands in the world.

Check out a review of REM's 1999 concert in Lansdowne Road.