A review of their album 'Ratatat'

From Deep Purple's "Smoke on the Water" to The White Stripes' "Seven Nation Army", serious riffing is at the heart what makes a classic rock song. Think Nirvana's "Smells like (teen spirit)" became an anthem for a generation because of those ambiguous lyrics? If it wasn't for those sledgehammer riffs I doubt it would have worked its way into the public consciousness. A great riff is what makes you make silly der-der-der guitar noises while playing air guitar when you think no-one is looking. 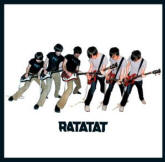 So perhaps it comes as bit of a surprise that some of the best riffing to be heard on any album this year doesn't come from some retro-garage band, but from electronica outfit Ratatat. It helps of course that one member of this duo is already a noted guitarist. Mike Stroud has already toured with the likes of Ben Kweller and Dashboard Confessional. The other half of Ratatat is Evan Mast, a producer who has already released electronica records under the name E*Vax.

Despite all the brilliant and even at times bombastic riffs found on this album, most notably on the opening track "17 years", you will not mistake Ratatat for a rock band. This album can be quite mellow in parts, even reminiscent of chamber music with constant counter-melody. Mellow doesn't mean boring thankfully. Ratatat is not a victim of self-conscious tastefulness in the same way that Royksopps' pleasant but disappointing "Melody AM" was. On the contrary, this album is daring and even epic at times.

As you can probably appreciate by now, Ratatat draw on a wide variety of styles, but they don't do this by blatant genre hopping or sacrificing their unique style. For example, they blur the lines between computers and guitars. You never really know where the heavily treated guitars end and the synths start. Track 8, "Lapland" sounds almost like it could have been penned by Dr Dre for a few seconds before morphing effortlessly into something else and occasionally back again as the track progresses.

Its hard to do an instrumental album and get it right but Ratatat have done it. But the real achievement is that they make you want to play air guitar too.