A review of their album 'Pieces of the People We Love' 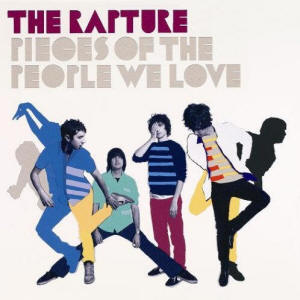 Review Snapshot:
After a great set at the Electric Picnic this year New Yorkers the Rapture have perhaps released the party album of the year in the shape of 'Pieces of the People We Love', a change in direction from their critically lauded debut 'Echoes' but one that deserves to bring them a whole new audience.

Full Review:
The Rapture's critically-adored debut 'Echoes' was a searing mix of edgy guitars and dance beats, sounding for all the world like a bunch of post-punkers who had thrillingly discovered their first E, yet replete with moments of forlornness that suggested they knew all about the comedown as well.

Such was the potency of their digifunk-punk that indie kids found themselves standing alongside whistle-blowing ravers at their gigs, watching as a four-piece band and a cowbell produced raw dancefloor shakers like 'House of Jealous Lovers' with barely a sampler in sight.

Which means the sheer slickness and pop sensibility of their second album initially comes as something of a shock. New production collaborators Paul Epworth and Ewan Pearson bring with them some serious Bloc-rocking beat credentials, and have upped the funk ratio considerably.

But it soon becomes clear that whatever they might have lost in the studied cool stakes they've gained in some seriously exuberant hooks and 'choons'. Case in point is 'Get Myself Into It', which emphatically convinces you to do just that, an irresistible bass groove, chorus and tooting sax grabbing your shoulders and shaking them silly.

This record is all about getting you on the dancefloor, and if you don't like it then all you need to do is check out 'Whoo! Alright - Yeah?Uh Huh', and its refrain "People don't dance no more / They just stand there like this / They cross their arms and stare you down / And drink and moan and diss". Take that, hipsters!

It sounds one helluva lot of fun, barely drawing breath all the way through though also taking in some classic psychdelia-lite in the shape of 'Calling Me' and 'Live in Sunshine'. Ultimately The Rapture manage to retain their edge through sheer quality of songwriting despite upping the pop ante in glorious

Can't wait to see them pull this one off live. Now where's my cowbell?