A review of their album 'Broken Boy Soldiers' 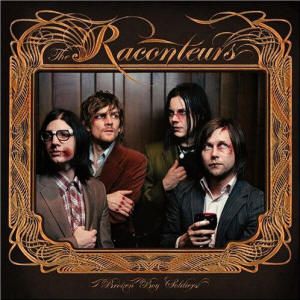 Review Snapshot:
At last, the eagerly-awaited album by the indie dream-team of White and Benson. It's a likeable confection of Beatlesy guitar pop which generally sounds more Benson than White - which is a good thing. Will Brendan Benson finally become a star?

Full Review:
By the end of 2005 great heat was being generated in advance of the forthcoming collaboration between Jack White and Brendan Benson. Given White's profile as alt-rock's most mythologised current star and Benson's back catalogue of agreeably melodic pop, even the most cynical of White's doubters (present reviewer included) must have been intrigued by the proclaimed 'event' release of 2006.

No record could live up to that kind of expectation, and 'Broken Boy Soldiers' doesn't. It's still worth a listen, though. While in no way the let-our-powers-combine superalbum some predicted, neither is it the too-many-cooks ego-trip it could have been. It's not a White Stripes record in disguise - the familiar guitar jerkiness of 'Store Bought Bones' is the only overt nod to White's day job.

However, the Raconteurs suffer from the same flaw as The White Stripes; slight material. 'Steady As She Goes' has those catchy guitar slashes and a radio-friendly chorus but the song itself is lightweight. And so it goes for too many of the tracks here - as with the White Stripes, half-ideas are stretched out with inane lyrics, three-chord-tricks and unremarkable playing.

Benson's contribution seems to be the unmistakeable Beatle-ness of this record. 'Hands' has the tightly-wound guitar lines and droning harmonies of George's tracks on 'Rubber Soul, 'Intimate Secretary' is White Album-era Lennon acoustic pop and 'Yellow Sun' has the mellow organ sound of 'Abbey Road'. But it's not all Beatles - the startling title track sounds like Steve Marriot screeching over a strange hybrid of 'Paint It Black' and (okay, just a little more Beatles) 'Helter Skelter'. It's by far the most interesting and adventurous track on the album.

The rest of the album is formulaic, but fortunately for Benson/White it happens to be a sound formula of Sixties-influenced guitar pop with a little bit of blues (that is, White's rather bland and tame idea of the blues).

This album's good points may be lost in the mild disappointment that it's not the masterpiece many wanted it to be. It's still better than the White Stripes, though.