A review of his debut album 'Hidden Daylight' 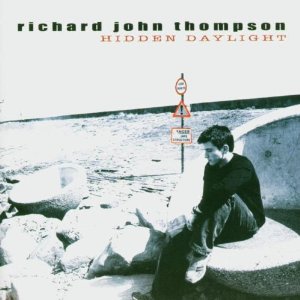 No, it's not THAT Richard THompson, he who cut his teeth with Fairport Convention. Instead this is 18-year old Richard John Thompson, a new name in music studying music at college in Newcastle in England, yet at the age of only 18 has already released his debut album 'Hidden Daylight'.

In an age that appears to be dominated by manufactured pop, I decided to give this debut album a good listen to. 'Hidden Daylight' opens with 'A Second To The Sun', a kind of pop-rock song that is a cross between Def Leppard and Bon Jovi, with a bass-riff thrown in for good measure. An unusual choice for an opening track, especially when it transpires there are much better songs on the album.

'Another One In Your File' is rockier with a great guitar solo, but then the album takes a change of direction. 'No One Ever Told Me' is a beautiful ballad that gives me a real chance to hear his voice and listen intently to the lyrics, all of which are written by Thompson).

'Angel In The Underground' is an upbeat number that has the potential to be a hit, and is one of the stand-out tracks on the album, but 'Halo' is worth the purchasing price alone.

Thompson sits at the piano and for three minutes we're treated to a moving ballad in which he sings "has anybody seen my halo / I need it to avoid the rain". The song then packs a killer punch with its unexpected blast of electric guitars and drums before returning to its calming influence. The closing track 'Cry' is a solo effort in which Thompson declares his love for the girl he's missing and wants to return home to. Here again it's the simple vocal and acoustic guitar that blend together beautiful.

This album is a mix of ballads and rock songs and shows the signs of a confident young man determined to make it in the music business. He can write different types of songs, can play a variety of instruments, and I'm sure he probably pressed the discs at the processing plant also.

I just feel the better songs like 'Halo' and 'Cry' are too far down this album to get recognised and should have been the opening tracks, but then perhaps Richard John Thompson and his band would rather be known for their guitar riffs and influences like Radiohead and the White Stripes than for their slushy ballads, and that's fair enough.

If he never makes it as a successful singer, you can be sure that his song-writing talents have the potential to keep him in the music business for many years to come.