A review of their album 'This Corn is Awesome' 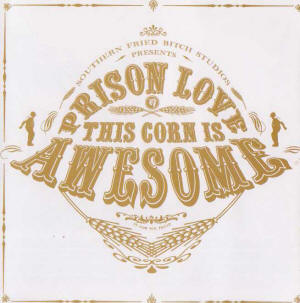 Full Review:
When it comes to Prison Love, I think the King put it best when he sang, "Number forty-seven said to number three / You're the cutest jailbird I ever did see". But seriously folks, I can't believe it's taken me until now to get around to reviewing the debut of a band who mix a serious passion with American old time music with an entertaining brand of tongue in cheek showmanship. Released in 2004, "This Corn is Awesome", sees these redneck troubadours ploughing a furrow through a number of roots classics and country standards such as, "Parlez Nous a Boire", "Never Picked Cotton" and 'I Saw the Light'. Although, given the name of the band, a better album title might have been, "I'm your bitch now Bubba" or even, "Don't Drop the Soap".

Recorded at breakneck speed on the 28th of December 2004, what the record lacks in production finesse it certainly makes up for in energy and enthusiasm and on tracks like "Get On Your Knees (and Pray)" and "Worried Man" the fine musicianship which has propelled Prison Love on to share a stage with the great Dirk Powell shines through.

All too often these days, roots music is played with an overwhelming seriousness, as if these tough, robust tunes suddenly need to be handled like glass figurines and, as a result, the sheer fun and life is drained from them. Prison Love make no such mistakes on an album that is a worthy addition to any comprehensive collection of Americana music and adds further proof to the thesis that the South East of Ireland is nearer to the Mason Dixie line than anyone would like to admit.

Prison Love are on the run, long may they evade capture.