A review of their album 'Evil Heat' 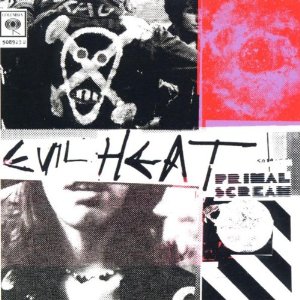 I've had a long love-hate relationship with Primal Scream. 'Get Your Rocks Off' fitted in perfectly with those teenage diddlying with retro-rock.

One reviewing friend's advice for listening to the latest album advised "...wiring your stereo up to a microwave oven and then play a combination of Can, The Stooges, Suicide, The Doors, Kraftwerk. Then you'll really get some 'Evil Heat'."

I didn't go that far but it gave me some idea of what to expect. True, this is one of the most disturbing, sometimes frustrating albums I've ever listened to. It's quite all over the place. The stylistic leaps are probably both the most frustrating and most exciting thing about Evil Heat. The lyrics are surreal and apocalyptic, ?la 'genetically-engineered-ultra-violence' but it all somehow works. The best tracks are 'City', 'Autobahn 66', 'Rise' and 'SkullX'.

Primal Scream's last offering, 1999's Xtmnr, far from being compromised itself, offered slight relief by being flawed towards its closure. In terms of the band's progression and quality control, Evil Heat is an improvement, and sounds far more complete.

There is nothing on here that really matches those first 6 tracks on Xtmnr (and its final track) but there are echoes of them to be found here; the hyped up guitar battering of 'Accelerator', the fuzz bass of 'Exterminator', 'Some Velvet Morning', featuring (very respectably) Kate Moss, and the adrenaline rush of the first and proper mix of 'Swastika Eyes', titled 'Miss Lucifer'. However better to leave the brilliant be: this proper mix is not as good as the original.

Elsewhere we get warped psychedilia on 'Deep Hit of Morning Sun'. 'Detroit' meanwhile is a very aggressive punk anthem about 'collateral damage', and taxes. 'Lord is My Shotgun' goes all bluesy while 'A Scanner Darkly', a peculiar number that sounds as if its going to be one of those dark, brooding instrumentals but turns into a quirky 80s style melody that sounds not very unlike a Cat Stevens tune.

Primal Scream albums have each typically stood for a certain essence and spirit. So, 'Screamadelica' was a reminder of acid-house days when people rediscovered dancing, while 'Give Out But Don't Give Up' smelt strongly of retro rock n' roll à la the Rolling Stones. Xtrmnr meanwhile was a landmark record that angrily described youth alienation and political immorality. Evil Heat has some of the anger and literacy of Xtrmnr but it feels more like a musical project for the sake of the music, sans ideological messages.

It's a head-wrecking, claustrophobic, sleazy and intense selection of songs that offers little form of light relief. But it's precisely because it's so twistedly engaging from start to finish that this reviewer was constantly slipping back into the stereo. This album has more pure, undiluted rock and roll rebellion in it than most of this year's releases. Yes indeed, Primal Scream have once again excelled themselves as the masters of exciting and uncompromised music. Escape it, if you're scared.