A review of their album 'Writer's Block' 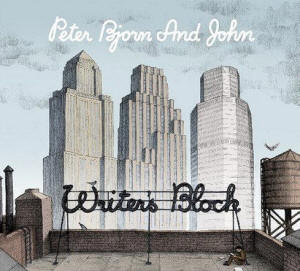 Review Snapshot:
While the emo bands are whining and the singer-songers are simpering, here are three (not two; there's a comma missing) Swedish lads continuing the tradition of upbeat Scandinavian indie-pop as bright and odd as the midnight sun.

Full Review:
Bringing whistling back to the airwaves for the first time since 'Winds Of Change' by The Scorpions, 'Young Folks' by Peter Bjorn and John has been one of the year's catchiest radio hits and still sounds refreshingly good even after umpteen listens. 'Writer's Block', their third album, features plenty more whistles, bongos and lo-fi vocals and shows that they've plenty more fine songs. The Eddie Cochran-style rock n' roll swagger of 'Let's Call It Off' makes for another standout track, another four minutes of uncomplicated pleasure.

This is an album about enjoying life - which is not to say it's happy-clappy fluff. 'Object Of My Affection' best expresses the manifesto of this record: "And the question is / Was I more alive than I am now? / I happily have to disagree / I laugh more often now / I cry more often now / I am more me." You could lock your emo bands and your singer-songers in a room for a week and they'd never come up with something so thoughtful, mature and true.

The playfulness of 'Young Folks' is a dominant feature of this record's sound - plenty of odd percussion and acoustic instruments. In particular, John seems to have had most of the fun - he's credited with 'whip', 'whoo!' and 'my first kick'.

The romantic imagery of 'Paris 2004' ("While I'm sleeping / You paint a ring on my middle finger with your black marker-pen") captures this album's spirit; life is for laughing, crying, living and loving - and for making good music. In every way, an album that's full of life.