A review of the album 'The World Won't End' 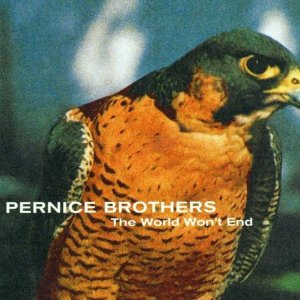 The Pernice Brothers' new CD 'The World Won't End' has a beautiful bird of prey on the cover. It seems that some bird's been preying on songwriter Joe Pernice's heart though it might not be obvious on first listen.

First you notice Joe's warm and dusty vocals breezing over a bouncy, rhythmic musical vehicle that passes by like wagons on the trails of the Old West. The use of subtle strings on many songs is the first hint of the trail of tears that lies just beneath the surface. The two opening songs 'Working Girls (Sunlight Shines)' and the single '7:30' are pure pop pleasures just waiting for radio airplay. Then they roll into well-worn Pernice territory - sometimes soft, sometimes a bit more rugged, sometimes just mushy enough that they almost get stuck in a rut such as on 'Shaken Baby', but they pull themselves through each time. The sparse guitar of 'Cronulla Breakdown' ends the CD with its yearning plea "I'm still in love with you."

The musical running order for this CD is different that the lyrical running order given inside the booklet. Playing it in order of the lyrics (hint: 2,5,7,3,11,1,10,4,6,9,8) brings out the victim in the vocals and the fragility of the music. Repeated words like 'sleep', 'suicide', 'summer' and 'winter' stand out in the songs. If love was the predator then the songwriter was the prey. This play order places the superbly haunting 'Flaming Wreck' as the finale. The slow-burning build-up in the music almost dies out only to come crashing back with a blaze of hellos.

Though perhaps not autobiographical, this album is the sound of a man devoured by love. Consumed and abused, his bruised heart is still beating because, indeed, it's not the end of the world.

Click here for a less positive review of the same album.