A review of her album 'Impeach My Bush' 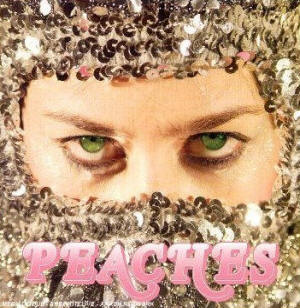 Review Snapshot:
East Berlin's favourite bold child, Ms. Nisker, makes a mildly political statement in a glam punk style - but is there any substance to the subversion?

Full Review:
The bawdy and confrontational teaches of Peaches have always been an exercise in pushing sexual taboos in the faces of the conservative. Her recipe for socio-sexual commentary has used humour, innuendo and 12" puns with a deftness and confidence of a woman in full control of her (throbbing) libido.

Peaches does a mean line in dirty dance floor electroclash that has had men in nightclub's across the globe shaking their dix at her command. Her previous two albums have been pretty mixed affairs, strewn with both bland, one-dimensional beats and moments of pure genius. All of which are glued with her rather addictive cult of personality. 'f**k the Pain Away' and the riotous Iggy Pop duet 'Kick It' are highlights from her previous works.

The opening track, "f**k or Kill" on her latest album 'Impeach My Bush,' begins with a near grease-lightning 50s beat. She gets straight to the point: "Let's face it we all want toush/If I'm wrong impeach my bush." So, without further ado, the lady wants to make a political statement. But wrapping it in a tongue-in-cheek double entendre so as not to be singled out for making any 'real' stand seems a trifle too 'safe' and let's be honest, Peaches doesn't usually do 'safe'.

Lyrics like "I'd rather f**k/who I want/than kill who I'm told to" trivialise the issue and the concluding "Impeach/ Bush/Impeach/Bush" is thrown in, just in case you needed the pun to be spelt out for you.

So we're off to a rocky start but things soon heat up with 'Tent in your pants'. A downright filthy ass sleaze-fest - this is Peaches doing what she knows best. A sub-bass here, a moaning backing vocal there and images of Caligula in Hollywood abound. It's one of the highlights in the album, as is 'Hit It Hard', which will defy the most prudish of you to start losing your clothes. It benefits from the addition of a band's backing, processed synths and a kicking drum beat. Peaches growls "If you're gonna do something you gotta do it full on. Hardcore."

Joan Jett features on 'Boys Wanna Be Her', a guitar licking leather glam-rock-meets-New-York 70s punk cool. 'You Love it', 'Do Ya' and 'Give 'Er' which features Queen's of the Stoneage's Josh Homme on guitar, are also strong tracks and it's this sound that she really excels in and you can actually here her singing.

"Two Guys (for Every Girl)," which features Gossip lead singer Beth Ditto on backing vocals is a bastardly catchy tune. And while two guys for every girl is a nice idea (for the ladies) but I'm not sure how quickly voyeuristic ladies will take to the boy on boy action she's biggin up. But sure there's always a first.

The DIY ethic of old has been replaced somewhat with an attempt at a fuller sounding album employing co-producers Mickey Petralia, (Ladytron) and Greg Kurstin (Gwen Stefani). But when it comes down to it, Peaches hasn't changed the menu in any shape or form. Other than, perhaps, to encompass some passing political judgement. Is this a shallow attempt to say something of real meaning that must use humour to justify its lack of conviction? Or is it a genuinely genius use of subtly and wit. I suppose comparing Bush to her, em, bush, is pretty funny - but isn't it a little too obvious?

On the front cover of the album she dons a sequined burkha. With just this visual representation she touches on something far more powerful. Her ire is misdirected when Bush is the butt of her joke, her strength lies in exposing taboos and seeking sexual emancipation and democratisation. Miss Nesker is an equal opportunities lover after all.