A review of his album 'Wind in the Wires' 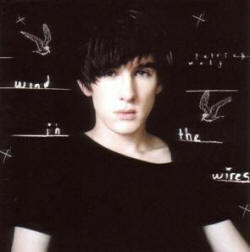 Full Review:
The Wind in the Wires is a fascinating album, full of juxtapositions. A beautiful pairing of traditional and modern sounds, where piano accordion and ukuleles run parallel with the whirring of machines, all of it imbued with passion and conviction.

Melancholic piano and violins intertwine to dramatically open the album with 'The Libertine'. The song begins as a classical opus only to turn on its heel with a pounding, processed beat that lifts the song into the present day. Background samples of manipulated electronics race alongside Patrick's distinct vocals, which are theatrical and enticing.

'Teignmouth' is a poetic and evocative song, if a little slow-paced. Again samples keep the song from straying from introspection into mournfulness. 'The Shadow Sea' is a blissful interlude of mandolin that drifts warmly into the album's title track 'The Wind in the Wires'. This is the albums finest moment. A song in praise of wild electricity "made static by industry", the vocals are engaging and confidently self-aware and Patrick's turn of phrase is taut and emotive. Sampled electricity fades the song out appropriately.

'The Railway House' has an intoxicating rhythm and a gypsy flavour that evokes thoughts of folklore and natural imagery. Patrick is clearly infatuated with the wilds and it's hard not to be drawn into his world. In fact, the album is dedicated to "the strong ropes that have carried me" and "to electricity, to magic." The song 'The Gypsy King' tells of a coming of age reflection, a theme that runs subtly throughout the album.

It's not all joyous though. 'Jacobs Ladder' is a definite filler and didn't need including (I have read the superstitious Wolf wanted to make up 13 songs on the album). If the album is starting to sound like a new age Kila tribute then be assured I'm not doing it justice. Recent single 'Tristan' is the very antithesis of that notion. It's a bold, brash song with a bizarre 80s sexy synth feel to it. It is sharp and industrial and the climatic hook "My name is Tristan. And I am alive!" is like a modern day Adam Ant.

'Eulogy' holds on to the coat tails of the album's finer moments and could also have been left on the cutting room floor. The album's closing track 'Lands End' is by far the most commercial sounding song and doesn't carry the same edginess and wit the other tracks do. A small quip though since all things considered, this is one of the most interesting and refreshing albums I've heard since Arcade Fire's Funeral. Its imagery and inventiveness is brimming with character and personality and it's a well recommended listen.