A review of their album 'The Blue Album'

I remember it well - March 1997: "Chime", Orbital's signature belting out, the music so loud I could feel my ears bleed, the Olympia's roof was lifting off and Phil and Paul Hartnoll were hopping around like demented fireflies behind banks and banks of synths. That night they were making make serious beats but they laughed at themselves too. Phil and Paul were more folk heroes than stars, they hid behind their sounds and in effect that was part of their charm - were the Hartnolls running the machines or the machines manipulating the Hartnolls? Irrespective, back then they looked and sounded class, an overpowering combination of tough beats and tender melodies backed up with a lightshow that hopped second to second from the dark to the daft. Much was made of the better quality of the live shows compared with their recorded material but "Insides"and "Snivilization" are two of the best albums of the mid nineties , real masterpieces of electronica that transcended all categories and appealed to all tastes. 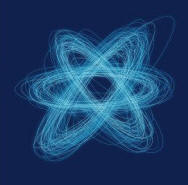 At the Olympia that night they were promoting "Middle of nowhere", a reasonable enough collection bookmarked with the thumping "Way out" and the fetching "Style", two great numbers. But in hindsight "Middle of nowhere " marked the beginning of the end for the Hartnoll brothers rather than the end of the beginning. The laboured and sloppy "The Altogether", their next outing, was a major disappointment, their collaboration with the mithering David Gray representing a real nadir. A fairly ropey Greatest Hits collection followed and the recent announcement that Orbital were to split surprised nobody.

For these and many other reasons it's difficult not to approach "The Blue Album", their last album, with a degree of trepidation, but if "The Altogether " was Orbital's "Let it be" this album is their "Abbey Road". "The Blue Album" is not perfect. Track 2, "Pants" - with its unconvincing beats and forgettable melody - is in fact pants. "Bath time" is a ropey dud of a filler but there are some real highpoints here too. "Transient", the opener, is reminiscent of Joy Division's "Atmosphere" put through a Philip Glass filter, "Lost" is a perfectly judged and gorgeously arranged piece of electronica, while "Acid Pants" sees Phil and Paul working a clanging dance track with the legendary Sparks. But the album's real peak is "You Lot"- featuring a spooky scary spoken rant by British luvvy Christopher Eccleston about genetic engineering, undertowed by trademark beats and a lush melody. "You Lot" should never work - but it does.

"The Blue Album" represents a real return to form for Orbital, and there's enough here to indicate that the split may not be permanent. Here's hoping.