A review of the album 'Mechanical Wonder' 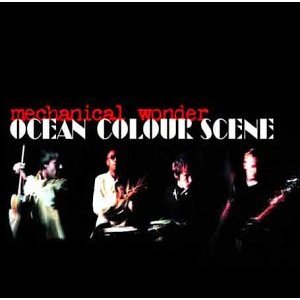 Ocean Colour Scene are a singles band if ever I heard one. While songs such as 'The Riverboat Song' and 'The Day We Caught The Train' are really catchy, funky songs that fully deserve their success, these singles have been the height of Ocean Colour Scenes limited appeal to me. Beyond these couple of top tunes you see, the music fades into that bland indifferent realm of the average pop song. Or worse, into that of the boring pop song. So, I approach this Ocean Colour Scene's fifth album with little hope that the band have suddenly stepped out of their role as a singles band and become a brilliant and experimental indie group.

'Mechanical Wonder' throws up few surprises. The album opens with the flagship single 'Up on the Downside'. It's a good song, catchy and melodious with decent lyrics. A real radio-friendly pop tune. It is also the best song of what is a decidedly dull album. The ten tracks that follow are all decent songs but are totally lacking in any passion whatsoever. Dull slow ballad type tracks that don't really go anywhere. The best of the rest are the title track and 'Can't get back to the baseline'. These songs are just a little bit funkier but still don't reach any great heights.

After twelve years and five albums Ocean Colour Scene are still churning out the same risk-free music. Even their fans must be getting bored at this stage. It has to be concluded that Ocean Colour Scene are flogging a very tired and worn out workhorse. Please boys, do us all a favour and put him out to grass.