A review of their album 'Half These Songs Are About You' 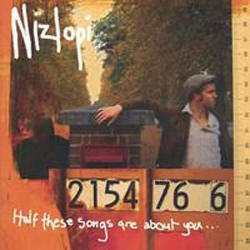 Review Snapshot:
The Persistent Christmas nearly-men offer ten more tunes as backup to the festive hit about a boy, his Dad and a big yellow digger, with surprisingly likeable results - offering a not-quite-diverse-enough-but-diverse-nonetheless collection with varying degrees of chirpiness.

Full Review:
Frankly, you must have been living under a series of large boulders - on Mars - if you didn't hear Nizlopi's 'JCB Song' in the run-up to Christmas. The charming ditty about a schoolboy taking the day off to drive with his Dad (who may or may not have been Bruce Lee) and being the scourge of the traffic corps while doing it sat atop the charts before Shayne Ward's commercial powerhouse trampled it into Number 2 for the day itself.

The folk duo (self-tagged 'folk hip-hop'" er, yeah) - vocalist and chief strummer Luke Concannon, of Irish descent, and John Parker on the double bass ("Stephanie") and human beatbox(!) first released 'Half These Songs Are About You' three years ago to reasonable acclaim, when it topped the UK National Unsigned Charts for an impressive ten weeks.

It's a testament to nothing other than sheer perseverance and passion that Nizlopi hung around to do this well, though - the band have existed for a full 14 years now (Luke and Stephen met on a schoolbus) and ,before the online JCB animation successes that secured an album deal, recorded their album in a home studio, funded by Luke's parents on their own improvised record label, FDM (Folk 'n' Deadly Music).

There are a couple of things that you learn from listening to this album. The first is that a hit single, as most will have learned by now, does not necessarily dictate the entire mood of album. The second is that practice nearly does make perfect and that fortune does indeed favours the brave.

For all the bravado and light-heartedness of the album as a whole, it's sandwiched by the surprising but comfortable adult angst of 'Fine Story' (if ever an album opener changed your image of an band in twenty seconds or less, this would surely be it) and a bizarrely dark and defeatist secret track.

What lies between, though, does remarkably well to steer clear of tedium, managing somehow instead to vary different shades of happiness to provide a thoroughly listenable - and after a few listens, likeable - opus. Second single 'Girls', following 'Fine Story', is the natural successor to 'JCB' and is a happy medium of the simplicity of the Christmas nearly-topper and the rest of the album, but you wonder if perhaps it typecasts the band into a particular juvenile frustration. 'Call It Up', the very next track, may have been a better choice: a fine and very, very catchy feel-good tune that, with friendly DJs, may command huge amounts of airplay soon.

On the subject of typecasting, though, perhaps the choice was a good call - tracks like the cheerful 'Faith' is perfect fodder for an easy wake-up on breakfast radio, borrowing Stereophonics lyrics ("Sing a song that's true") and with a grooving bass. Others like 'Long Distance' would make a frustratingly huge single for the likes of Katie Melua. The real achievement of the album though is in displaying the true diverse range of emotions Nizlopi are capable of. No better example than the consecutive pairing of 'JCB' and 'Love Rage On' with its Latino-influenced sheer pissed-offness, well-placed brass and - God forbid - cuss words! To be honest, it sounds like a digestibly credible Chico Slimani, and that's really a lot better than it sounds.

By the time the CD rolls to the closing 'Worry' - itself only just rescued by its haunting secret successor - the shades of happiness admittedly do wear thin, but repeat listens confirm what you really wish you didn't have to admit if you didn't like 'JCB' - Nizlopi are capable of far more than childhood reminiscence. Although at times lyrically shallow, the album is musically diverse enough to be a good listen. It would have been perfect for Mother's Day and would still somehow serve well as a pop-conscious baby sister's birthday present. And even if one-hit wonder status does befall Nizlopi, and this album doesn't manage to take off, then - at the very least - you can't begrudge them the annual festive royalties top-up.