A review of their live album 'Hullabaloo Soundtrack' 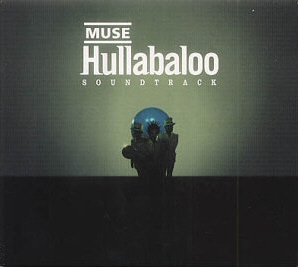 Since I first listened to "Showbiz" Muse have been a bit of an enigma to me. This was a solid album with flashes of brilliance and bags of potential for great things in the future. Their second album "Origin of Symmetry" for all its slick production and packaging failed to hide a band that had progressed little or nothing since their initial outing. It was, to me, a disappointment as they continually pepper their albums with interesting ideas and sounds that are overwhelmed by the need to "rawk out" in a way not seen since the goliaths of metal roamed the arenas of the world.

So, on first inspection, 'Hullabaloo Soundtrack', a double CD of a live concert & b-sides stinks of record company cash in. To be honest, live albums are not my bag at the best of times and b-sides are rarely fare better as they lack cohesion and theme. Thus Hullabaloo clearly sets its stall out for die-hard fans rather than the casual dabbler.

Yet, on listening to the b-sides, I realise I am doing a disservice to Muse (if not their record company). There is a smattering of jaw-droppingly good tracks here. It kicks off with "Forced In", a mid-tempo tune with a slightly eerie, almost Portishead feel with indiscernible Cocteau Twins vocals. I can only assume it was a bit too experimental for inclusion on Showbiz.

Moving on a few tracks is the awesome "Map of your Head". It is hard to reconcile the full on Muse from the one that occasionally produces they most beautiful acoustic tracks. With a Spanish acoustic riff, it is hard to understand how this was not a single (until you think of their core fan base, more on that later). Likewise for "Shine Acoustic" with its fairground organs, gentle vocals and guitar. Both tracks are things of beauty.

Yet the difficult aspects of Belamy's songwriting are glaring obvious here. "Recess", a strong track is dragged down by overbearing vocals. When he is not singing like he is straining every cell in his body, he drifts into his trademark falsetto, so high it can be excruciating. Other than that, tracks like "Yes Please" and "Ashamed" are quite simply Muse feedback frenzies. To be kind, you could argue they are Hendrix & Zeppelin for the new millennium. Equally, you could say they are the bastard sons of the Quo and Queen on speed. I find these type of Muse tracks great for clearing a hangover but are also the reason I don't listen to their albums as often as I should. Overall, some fine tracks and some so-so efforts.

The first time I saw Muse live they were touring to promote Showbiz. I can honestly say that I was probably about 10 years older than the average age and conspicuous in so far as I wasn't hassled for ID at the bar (rather disappointingly). I was also surprised at how young the band are themselves and yet to be such accomplished musicians. Of course, this all explained a lot about their tendency to rock out. They love it themselves; their audience of disaffected youth was lapping it up and more power to them both. Muse certainly give their fans exactly what they want so as a live prospect, they are loud, explosive, incendiary and exciting. They make a hell of a racket for three guys and this is more that aptly captured on the live disc. Tracks such as "Showbiz", "Muscle Museum" and "Micro Cuts" show Muse at their most powerful with a healthy mix of noisy sing along crowd thrown in for good measure.

The live CD is exceptionally well recorded, one of the best I have ever heard. Yet for all the quality of sound, it never really captures (and in fairness probably never could) the sonic assault that Muse actually are live - a sheer wall of sound so loud and reverberating that it would leave the hair on the back of your neck standing up. All in all, it is an admirable effort but one that will probably mean a lot more to those who have experienced the intensity of a Muse live show previously.

Overall, Hullabaloo Soundtrack delivers some interesting moments on the b-sides and a damn fine live disc but is really only of interest to hard core Muse devotees. However, hats off to Muse - it is a quality effort where most albums of its ilk are slipshod rip offs. It might not earn them any new listeners but will certainly cement their current fan base.