A review of their EP 'Youth Is Wasted On The Young' 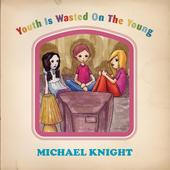 Review Snapshot:
This debut album from the Dublin based collective is crammed with a variety of wistful pop tunes that drip with softly textured melodies.

Full review:
Michael Knight is the name of the latest Irish group to make indie pop music that is actually worth paying attention to. Primarily, they are Richard Murphy (guitar, piano & keyboards), Edel Coffey (bass) and Lynn Millar (drums), with each member contributing on vocal duties aswell as mastering their preferred instruments. Together they sound like a charming hybrid of Belle & Sebastian, Camera Obscura and delicately sung Burt Bacharach numbers.

'Youth Is Wasted On The Young' howver doesn't dip too far into sentimental obscurity; instead it tries hard to keep the atmosphere amiable and light-hearted. Not every song on offer here is bulging with whimsical flair though, as can be spotted with the flat 'Success!' and the unnecessary 'No Second Best'. These two songs in particular trip the band up just as the album's momentum reaches a satisfying high.

Of the more smitten tunes though, 'Waves To The Shore' cascades with a honey-suckled ambience while 'The Lights Go On And Off' is the type of song that The Chalets have been aching to create. The backing vocals (of Coffey and Millar) give the songs an extra zip thus making them that little bit more sweetly seductive. One of the advantages that the group possesses is that Murphy can carry a song like 'Seasons' on his own, but when needed, the other members can come in with notable contributions.

The added vocals of Lisa Carey, Mary Carton, Caoimhe Derwin, Liadain O'Driscoll and Bennie Reilly help make 'Bright Eye' a bigger song than it would have been with just the core trio handling it. Another notable cameo appearance is by Patrick Freyne, who lends his distinctive voice to three songs including the bittersweet title track. However, it is Murphy who keeps the listener engaged with his pensive lyrics and imposing figure on each of the twelve songs. His presence throughout steers the proceedings to a delectable measure that makes 'Youth Is Wasted On The Young' one of the year's brightest albums.

A cartoonish feel lingers through the album, not just because of the artwork but also with how the music is produced. The bass guitar hums and the drums rarely snare excessively. Murphy's lead vocals can also sometimes chug away impassively, like on closing track 'I Did It Biff's Way'. The inclusion of that track leaves a heavy stain of incompletion at the album's end. Although, there is more than enough fondness seeping through on the majority of the songs to make the listener forget about the stale ending.