A review of their album 'All is dream' 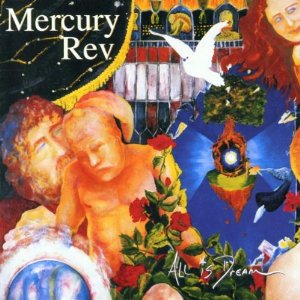 Mercury Rev's last album, Deserter's Songs, was an ethereal classic that paved the way for a number of experimental American bands to allow their imaginations to take flight. The Flaming Lips, Grandaddy et al followed up with a series of sublime albums that have signposted a new direction for rock music.

After a blistering gig in London this summer, hopes were high that the band would deliver a blast of escapist rock to satisfy our Deserter urges. The portents were good - the new songs seemed to build on what went before. But the resultant album of eerie music is cold and obscure, a selection of nursery rhyme songs in an overly polished environment. Where previously there was murky wonder, the band now have an almost crystalline sound that, to these ears, is harsh and unforgiving. I cannot escape into these songs - I want to escape from them.

Of course, being Mercury Rev, there are moments of frustrating beauty. The opening song, "The Dark Is Rising", rattles your speakers with its initial crescendo and settles into a Neil Young-like melody. The string-driven whimsy of "A Drop In Time" sounds positively sunny when compared to the darkness that precedes it and is all the more lovely because of it. And the single, "Nite and Fog", has a bouncy chorus but does not drill into your subconscious like "Goddess On A Highway" did.

Maybe the influence of Levon Helms and Garth Hudson from the legendary Band who guested on Deserter's was more pronounced than I originally thought. Their narcotic quality is missing here. "You're My Queen" sounds, unforgivably, like filler - a true crime for a band that have been so special before. Even the blistering guitar (most notable on Deserter's "The Funny Bird") is now clean and sober, lending the closing song "Hercules" an air of desperation.

Mercury Rev are most definitely not an 'immediate' band. But, ultimately, the record is not worth the effort.