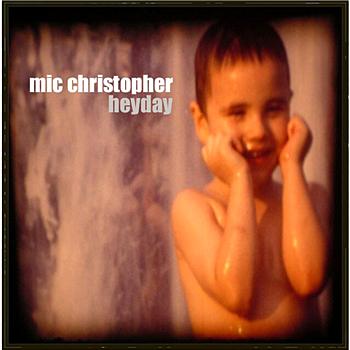 A self financed, self released EP of curious charm and warmth, Dublin based singer/songwriter Mic Christopher has been growing in stature as each week passes by thanks largely to some key support slots across the capital. A regular at the Frames' multi-supported shows Mic has the Frames to thank in spades with this debut EP. Managed by the same manager helps, as does the presence of Frames six-stringer David Odlum. But that's where any comparisons that there may be end.

Mic Christopher has that kind of folky voice that crops up a lot with your Dad's record collection. A warm, quivering country drawl that reminds the listener of dozens of vocalists including the bloke from Credence Clearwater Revival, Eddie Veder and even a teenage Neil Young before he learned how to attack an electric guitar and grow his hair.

The opening track 'Heyday' is an instantaneously catchy vibe on saying "Hey!", makin' up the years and foolin' around (in the hay?). Gloriously homemade in feel and execution it's the perfect introduction to this DIY talent. The rest of the EP pans out gently enough with a bluesy country feel that grows ever warmer with repeated listens. If 'Listen Girl' were any warmer it would be an oven while 'Looking For Jude' could have been written around a campfire at Woodstock.

There are a million and one acoustic troubadours (un)plugging around Dublin at the moment. Some are good (David Kitt, Pete Courtney, Adrian Crowley to name but three), some dreadful (no names to protect the guilty) and you can now add Mic Christopher to that list of quality. Check him out, you won't be disappointed.

Heyday has no label as - right down to the CD sticker - it's a homemade PC job. But it's available from Road Records, Fade St, Dublin 2. Email: road[at]groov[dot]ie

Added Dec 2001: Mic Christopher tragically passed away on Nov 29 2001 in Holland after an accident when on tour with the Waterboys. May he rest in peace.

Added Dec 2002: Mic Christopher's debut album 'Skylarkin' was released on Nov 29 2002, exactly a year after his death. Click here for a review of 'Skylarkin'.