A review of his album 'Ghosts' 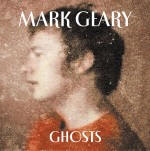 Review Snapshot:
Following on from the success of his last album '33 1/3 Grand Street', this new release is a step forward for this talented Irish singer/songwriter. With a little help from some friends (Glen Hansard, Ann Scott & Josh Ritter), good production work (mainly down to Dave & Karl Odlum) and some great new tracks, 'Ghosts' is a satisfyingly good album.

Full review:
'I'm haunted you know? I think we all are at some point and to some degree: by our past, by people and memories, by loss, grief, youth, fear, lust, love? and can we learn from it or are we doomed to repeat the cycle? Ghosts is all about that but there is also hope in the songs. You can't live without hope' explains Geary of his new album.

Through the eleven tracks (and one hidden song) a darker side to the singer/songwriter is revealed alongside his usual cheerful folksy persona. This darker or serious edge is the result of a more professional approach to recording this album with a backing band aiding the songwriter's quest.

While the opening track 'Beautiful' is stunningly charming, it might've been better served as a stripped down acoustic number. Things only get better with Josh Ritter making a cameo appearance on the mystical ballad 'Ghosts'. Glen Hansard adds that little bit more to the alluring 'You're The Only Girl', to the infectious 'Mid-nite Sun' & to the bewitching softness of 'Hold Tight'. The backing band introduce some welcome flavour to the album's sound with Karl Odlum contributing with some great guitar work.

The best thing about Mark Geary is that he writes songs which all have the ability to become a personal favourite to anyone who hears them. Of the new songs, 'Morphine', with its almost eerie atmosphere, 'Fanfare', the upbeat sing-along track which was nearly named 'Grandpa's Balls', and the quivering 'I Fell' all stand out. The finely tuned and sometimes ethereal backing vocals by Ann Scott on 'A Prayer For St. Rita' and 'Hold Tight' work really well with Geary's singing.

The drums, guitars, shakers and additional vocals all make a significant difference to his sound but it is still the songwriter who retains the listener's attention.

This album is not a leap but a steady step forward. Fans of his previous work will discover songs of the similar character but there are also some tracks that will surprise many. He has overcome the 'difficult second album' syndrome but something lingers in the songs warning the listener that more is to come.

Check out a review of Mark Geary live in Limerick in September 2003.