A review of their album 'Know Your Enemy' 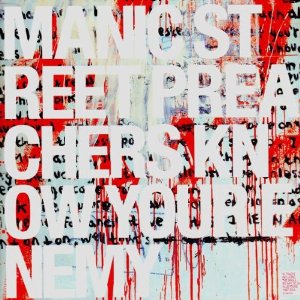 I studiously avoided the Manic Street Preachers last album. The singles were enough, there is only so many big chorus's one person can take. Songs like 'If you tolerate this (then your children will be next)' take just a few steps too far. If a band feel the need to preach, they should at least do it subtly. When I heard the single 'Found that Soul' from the Manics new album 'Know Your Enemy' I felt only relief. Gone were the over the top lyrics, the big chorus's and the preaching. This song took the Manics back towards their roots, a place where music was king. 'Found that Soul' is a rough and ready rock song that sees the band going some way towards retrieving the raw energy of their early music. This same song is the opening track on 'Know Your Enemy' and a great first track it is. It gives hope that maybe the Manics have once again found that soul...

The album's second track 'Ocean Spray' is another good one. It is a simple and affecting song with clear vocals and touching lyrics - 'It's easy to breathe / it's easy to breathe / to breathe only air / where life should be'. 'Intravenous Agnostic' starts off rocking, once again reminiscent of the Manics early material. 'So Why So Sad', also a single, is a catchy and harmonic song, with ghostly vocals and music that wouldn't be out of place in a fairground (albeit a laid back one). 'Let Robeson Sing' is a tribute song to folk singer Paul Robeson - 'A voice so pure / a vision so clear / I gotta learn to live like you / learn to sing like you.' That is the first five tracks and it's a great start to the album. Unfortunately, things begin to go downhill from here. While tracks six and onwards are good and very listenable, they don't tread any new ground. The best of the rest are 'Wattsville Blues' and 'Miss Europa Disco Dancer'. But after track ten the dreaded preaching comes back into play. There is a song called 'Freedom of Speech won't feed my Children' for jaysus sake.

So have the Manics 'Found That Soul'? Sadly, not really. Throughout the album the music is great and the vocals are excellent but the lyrics (with the exception of the first five tracks) are a tad dodgy. The Manics really are at their best when they are not preaching or trying to put across a political message. 'Know your enemy' is a good album, but unfortunately not a great one.