A review of their album 'i' 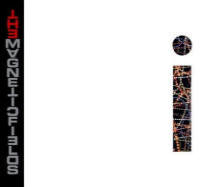 Review Snapshot:
Dark humour, outlandish lyrics and infectious melodies - it can only be the Magnetic Fields... or whatever name droll romantic Stephin Merritt trades under at the minute. Scaling back on the grand ambitions of the previous Fields album - the cult classic '69 Love Songs' - Merritt's new album 'i' offers more wry observations on love, the only time where history is written by the losers. However (to paraphrase an earlier pop masterpiece), we feel like we win when he loses, as long as it results in the fabulous gems which adorn this album.

Full review:
After a series of side-projects and indie-flick soundtracks, prolific New Yorker Stephin Merritt reassumes the mantle of The Magnetic Fields with the resolutely lower-case 'i'. His previous Fields work, '69 Love Songs', was a sprawling 3-disc kaleidoscope of dizzying eclecticism and fast-acting pop thrills, a bona fide classic whose stature will grow with the years. Since then, two wonderful albums as The 6ths ('Hyacinths and Thistles') and Future Bible Heroes ('Eternal Youth') have allowed him to escape the inevitable expectation surrounding a new Magnetic Fields album. Can 'i' possibly hope to match this standard?

First impressions are unpromising. Fourteen song titles beginning with the letter 'i' is hardly the most daring of concepts for an album and doesn't say much for the imagination at work here; 'x' would surely have been more impressive. One of the tracks, 'I Thought You Were My Boyfriend', is six years old, which suggests that Merritt's creativity may at last be suffering from the strain of maintaining his many nixers. The sleeve notes declare in italics that "no synths" were used, with the haughty air of classic head-up-the-hole pop egomania. And the whole thing comes in a horrible abstract-art sleeve and a slip-case package (future scientific research will establish, once and for all, the connection between slip-cases and disappointing albums). Yet Merritt dispels all these qualms with another hugely enjoyable and witty addition to his already-impressive CV.

With 55 fewer songs than the previous Magnetic Fields album, 'i' has less room for noodling and messing. As a consequence it's a focused and effective record with no filler or self-indulgence. Arrangements are precise and thoughtful, especially Sam Davol's restrained cello parts and Claudia Gonson's plaintive backing vocals and ornate piano/harpsichord flourishes. It's the quality of Merritt's craftsmanship, though, that sees 'i' consolidate his reputation as the best songwriter in America. His unashamedly catchy melodies hark back to pop's prehistory in Broadway shows, and by erasing forty years of rock clich?from his creative consciousness Merritt has rejuvenated guitar alt-pop over the last decade.

Lyrically, his droll delivery and romantic-loser persona allows him to get away with outrageous rhyming and an odd vocabulary that would seem forced and overbearing from the likes of Neil Hannon or Neil Tennant, perhaps his nearest counterparts on our side of the Atlantic. Yet Merritt never slips into the smug self-satisfaction which turns many people off the Divine Comedy, for instance. A fully-functioning sense of self-deprecation brightens 'I Don't Believe You' and 'I Wish I Had An Evil Twin', while the black humour of 'I Die' could have come from a Samuel Beckett play.

Whimsical songs like 'I Looked All Over Town' and 'In An Operetta' ("Because she's a princess / there are hints / of a prince / in the end") succeed by virtue of their funny and over-the-top lyrics. Only the strained kookiness of 'Irma' - a surprisingly tuneless effort by Merritt's standards - falls flat. Just as, in an Irish context, Glen Hansard took himself less seriously on 'Dance The Devil' (the Kool and the Gang reference, for one thing) and as a result turned The Frames from the worst band in Ireland into the very best, so Merritt also knows that a sense of humour is a valuable asset for a songwriter hoping to connect with his or her audience.

Yet despite his dry, wise-cracking persona Merritt also knows how to make a measured and subtle emotional impact when he wants. The storming Human League-style 'I Thought You Were My Boyfriend' is charged with hurt in its minor-chord verses and aggressive chorus. Closing track 'It's Only Time' maybe a bit too sentimental for some, but its poignancy (bearing in mind current events in U .S. society, a gay American sings "Marry me") rings true. Again there is a comparison with Beckett and tragicomedy, where happiness and sadness are all the more vivid from being in relief to each other.

If 'songwriting' for you means dishevelled Dylan fans shouting their angsty poetry while bashing an acoustic guitar, or if 'pop' means Busted or any of the litany of ringtone-muppets blocking up Saturday morning TV while you wait for 'Football Focus', then recommending 'i' as a masterclass in pop song writing may be the wrong tack. However, anyone up for catchy tunes and witty wordplay will be rewarded by this album's warm left-field charm and intelligence. Shame about the awful cover, though.