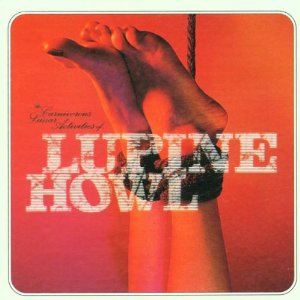 Lupine Howl chiefly consist of Jason Pierce's (former) backing band in Spiritualized. Sacked without reason by Pierce in late 1999, they quickly reconvened as Lupine Howl and released a bona fide classic slice of psychedelia in their debut single "Vapourizer". Three singles later and having recorded tracks with Massive Attack for their forthcoming album, they finally release their debut long player. Borrowing more than one trick from their former employers in Spiritualized (especially in the lavish packaging department) Lupine Howl's debut is a satisfying, if slightly disjointed, recording. With a mindset that wouldn't have been out of place in the acid-fried San Francisco of the 1960s, "The Carnivorous Lunar Adventures of Lupine Howl" is a nine track outer space trip of the loosest jams this side of, erm, a Spiritualized live performance but, try as they may, they haven't created the classic that their debut single (and indeed the - limited edition - packaging of the album) hints at.

Things go swimmingly from the start. The classic "Vaporizer" is quickly followed by "Sniff the Glue" and hopes are high. They are then dashed with the awful third single "125" which, in its all-over-the-shop meanderings about a lonely, suicidal trip on a train, pushes all the wrong buttons. Things pick up considerably with the ten minute plus groove of "Carnival". More than likely written about their days in Spiritualized, the track may well cause some brief moments of worry on first listen as its central guitar "motif" bears a worrying similarity to Kula Shaker's "Tattiva" and the initial vocal lines sound like Lenny Kravitz in full-on 1960's soul man mode. But that shock unfurls and what the listener is left with is a cathedral high flag of intoxicating noise that spins, twists and moves and ultimately baffles in its "how did they do that?" loose brilliance.

Things get considerably mellower on "Lonely Roads" and Doves excellent "Lost Souls" album is recalled. To paraphrase the Eagles here, the peaceful (un)easy feeling continues with the ethereal and largely acoustic eight minutes of "Sometimes" but the mellowness doesn't last too long though. As "Sometimes" fades out in a rounded swirl of brass, harmonica, Hammond organ and the repeated line "when you know that you don't know" you do know that something monumentally heavy this way will come. And as heavy as some of the lyrics on "The Carnivorous Lunar Adventures of..." are, something even heavier does come along, albeit a song or two later, in the form of "The Jam That Ate Itself". But sadly the psychedelic punk rock wig out doesn't suit the band on record. While onstage and in the live context it's probably a blast, as an album closer it's a bad case of too much time spent rummaging around in fields early on a crisp Autumn morning then returning home to turn up the guitars and, like, trip out. Where Lupine Howl's strength is, it lies in the more adventurous and spacious tracks that litter the album. The likes of "Sometimes", the shifting and funky "Planet X", "Carnival" and "Vaporizer" are all superb. Their lyrics and music may be, ahem, "out there" and the habits learned in Spiritualized may need ironing out a bit but overall, "The Carnivorous Adventures of Lupine Howl" is a fine introduction and an indication that live, this band will be unmissable.

Lupine Howl play Whelan's in Dublin on Sunday May 6th 2001 as part of the Heineken Green Energy Weekend.