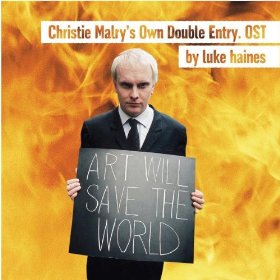 Well, more of that particular brand of arch post-punk commentary coined by the ever-rancorous Luke Haines. Opening track 'Discomania' is classic Auteurs, as is much of this soundtrack, so, supposedly, if you like that, you'll love this.

'In The Bleak Midwinter' features Haines' demented pixie vocal, wittering away over the Winchester Cathedral Choir's rendition of the old standard. Perhaps this is pointed, in context of the film to which this album provides the soundtrack, but here it serves no discernible aesthetic (or thematic) purpose. 'How To Hate The Working Classes' is sweet guitars and whispery vocals, segueing into 'The Ledger', an instrumental that is pleasant enough.

'Bernie's Funeral/ Auto Asphyxiation' is the first sign that Haines has any real handle on the film score as art form. 'Alchemy' and 'Art Will Save the World' - short instrumentals - are subtle pointers to the same ability, attempting to forge medieval gold from electronica. Still, these are slight enough and, unfortunately, the only real vestiges of cinematic understanding, insofar as it is possible to say without having seen the movie. 'England, Scotland and Wales', intentionally or no, harks to Pink Floyd's 'The Wall', and as soundtracks go this is probably the nearest comparison. But again so much more of that caustic soda 'wit' that seems redundantly hidebound by 80s socio-political morbidity.

In total, there are four tracks here whose titles include the word 'mania'. Ironic then that the general feel here is one of colourless dispassion. Perhaps this was the brief. Still, in its own right it is hard to view this album as anything more than Luke Haines by numbers.