A review of their EP 'Lucera' 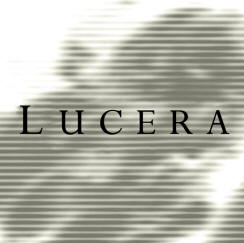 Full review:
The first thing that stands out about this CD, compared with EPs from other upcoming Irish bands, is that the computer recognises each track. Despite a very sketchy cover print, this CD is put together as professionally as one could hope from a struggling band. But the big question is what is the music like? It is, thankfully, original and intriguing.

With the first track 'Mountain Man', lead singer Darren Timony opens up the EP with some gentle suffering on the back of excellent guitar playing - 'You know yourself / You lost yourself / Told myself you'd get through this'. The tempo is then raised slightly on 'Right Or Wrong' where the percussion skills of Donal Herlihy snake around Timony's now intimate vocals, bordering between a delectable flavour of vulnerable distinction and a soft pitched Eddie Veder. The song itself ('Right Or Wrong') has a sombre charm that is typical of the band's sound, one not reminiscent of dirge-like ballads but more of atmospheric samples of aching rock. The atmosphere created on the CD comes in the form of excellent guitar sounds, which are down to some outstanding riff work by Martin O'Mahoney, some snaring bass playing from Tom Dillane and gritty rhythm guitar mastery by Darren Timony.

Lucera come across as being a close-knit unit, which transcends into brilliantly administered music. Each song on this eight track EP captures elements of this but none more so than 'Walkin' where the instrumentation and vocals click so well. This is followed by closing track 'The Greatest Day' and what a chillingly tender song to end on too. A simple beat lures you in just as the vocals appear and again some solid guitar work puts the structure in place. Some whining violin then comes in, predisposing an eerie yet almost mystical backdrop. It ends the EP with a signature of satisfaction that hums right through to the last note.

Lucera will only improve on the formula that makes them memorable. Go along to their shows and buy this release, it is certainly worth it.