A review of their album 'Riot On An Empty Street' 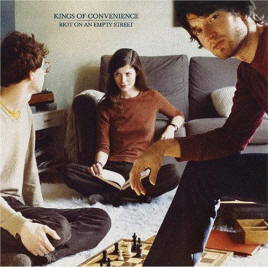 Review Snapshot:
Binding the simplicity of acoustic sounds with creative lyrics and soft vocals to reveal songs that can amaze, inspire and comfort the listener. A stripped down production gives the album a gentle breeze-like sound which gives the songs a personal touch.

Full review:
Hailing from Norway's second largest city Bergen, Erlend Øye and Eirik Glambek Boe first combined in a band called Skog. Then Erlend joined a band called Peachfuzz where things never really hit off and Erik went to study psychology just outside London. They remained friends, kept writing songs and eventually decided to seek a record deal under the name Kings Of Convenience. Source Records snapped them up quickly and the talented duo were recording in no time. In 2001 they released two albums: 'Versus' and 'Quiet Is The New Loud', which didn't receive that much publicity. It's been three years since they last released anything but their latest album has been certainly worth the wait.

Many music hacks have compared the pair to Simon & Garfunkel but there are huge differences between the two. Yes, they both deliver songs that are poetically refined with tender melodies. They both cram various instruments into their gentle breeze-like sound. But the tone that the Kings Of Convenience adopt is what gives them their edge. While they too can provide great imagery, it is the stripped down tone that transforms their songs into music that is that little bit more familiar or personal to the listener. When this record spins, there is an almost eerie yet comforting intensity that overcomes the senses - you almost envisage yourself being present in the studio where the songs were recorded, watching and slowly being enamoured by these emotion tingling songs.

In the second line of the opening track 'Homesick' they sum it all up for the listener: "I can't stop listening to the sound of two soft voices blended in perfection". Everything, from the song writing to the singing to the music, slides together to form a perfect mould. Each song is entwined with a fluency and acoustic magnificence that somehow manages to keep the album entertaining to the listener. The whispering 'Cayman Islands', the enchanting 'Stay Out Of Trouble' and the upbeat yet luxuriant 'I'd Rather Dance With You' all reveal the great chemistry between their vocals and the inclusion of various instruments like cello, piano and banjo. Honesty ebbs its way through the songs with a few great lines on 'Misread', a prime example of the duo's impressive song writing: 'How come no one told me / all throughout history / the loneliest people were the one's who spoke the truth/the one's who made a difference / by withstanding indifference'.

Feist, the Canadian born singer, lends her sweeping backing vocals to 'Know-How' and 'The Build-Up'. Her contribution coincides perfectly with the tone of the songs. As the album winds on and you find yourself being equally enraptured by each song, you will realise just how wonderful this album really is.

It is such a rarity to discover an album that is held together by songs of veracious beauty. So when you finally discover one you tend to give it special attention. 'Riot On An Empty Street' is an album of that quality.