A review of their album 'Anything Strange' 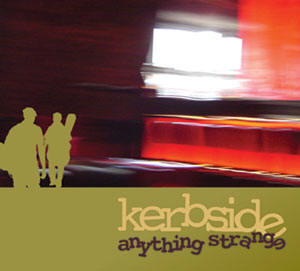 Full Review:
Sean Lightholder plays guitar and percussion. Kimberly Lightholder plays bass. Sean writes the majority of the songs. They both sing. Together, they are Kerbside. But more importantly, as a duo they are creatively deft in making music. From the opening crackle of 'Mahal Ko' through to the charming 'Indian Dance', both manage to command your attention with an album full of hidden delights.

'Anything Strange' flows with a plethora of sweet harmonies, tingling instrumentation and a cavernous swoop of glorious melodies. Basically this gives you that warm and fuzzy feeling inside. The slick production work builds a cosy ambience while making the album feel like it was recorded in a sitting room (which it was). The use of diverse instruments including the mandolin, keyboards, drums and harmonica works well across the album. However, it is Sean and Kimberly Lightholder that you will keep noticing throughout with their combined vocal styles and impeccable sense of timing. Songs like 'Talk' and 'Chastity' help to showcase a honey-soaked tenderness that cascades along through the album's entirety.

At times, Kimberly's vocals remind of a countrified Beth Orton but she has no problems finding her own voice on the tingling 'Departure', a song with sorrowful lyrics such as 'all the imperfections I could not disown/ are stripped away on this happy day'. But this is far from a morbid album though with a number of upbeat folk-pop numbers standing out, including 'College Town', 'Travellin'' and 'Indian Dance'. It is the blend of elegant ballads and hopeful pop tunes though that transforms this collection of songs into a well-rounded album. It is one of those albums that tap into a range of emotions without you even noticing.

Kerbside, a name to be aware of and 'Anything Strange', an album deserving of your attention.