A review of their album 'Under The Iron Sea' 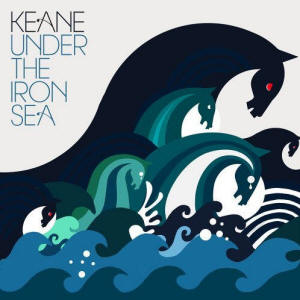 Review Snapshot: The difficult second album. Lyrically worse, musically, no change. Keane try too hard and while there are a few worthy inclusions here, it's a disappointment considering they promised so much after the brilliant debut album.

Full Review:
Keane adapt a darker approach on the follow up to their debut 'Hopes and Fears'. From the mystique creepy opening of 'Atlantic', they set down the marker that they want to be taken more seriously than the previous album suggested.

Everyone will be familiar with the first single ''Is It Any Wonder', but the rest of the album doesn't contain too many radio-friendly songs, although 'Leaving So Soon' moves at a rapid pace, with Chaplin proclaiming " you don't really know me at all" and perhaps he's right.

Some of the ballads on here sound good. 'A Bad Dream' should bring out the cigarette lighters when performed live, and 'Hamburg Song' is beautiful, with just piano and vocals.

The title track surprisingly is an instrumental. It's nothing special and should really have been the play-out track on the album but it is followed by 'Crystal Ball', the best track on the album. Another commercial sounding favourite that will surely be one of the hits of the summer.

The closing track 'The Frog Prince' is sadly not a Divine Comedy cover, but it is catchy and brings out the child in Keane, with a reference to Shrek amongst the fairytale lyrics.

On the subject of lyrics, Keane won't be receiving the Noble Prize for Literature based on this album. The lyrics are bland with no substance and they could have been composed by the children The Frog Prince was written for. In your own words Keane, put it behind you, and try again.