A review of their album 'The Dancer Who Stole Your Shoes' 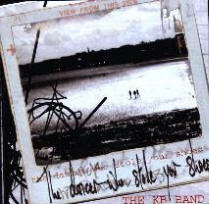 Review Snapshot:
This Dublin based trio have released an album that is as appetizing on every listen as it is when first discovered. Fusing together elements of jazz and alt country with indie pop rock, it is a remarkable debut.

Full review:
Anyone who picks up a copy of this album should read the inner booklet as the first track 'Frankly My Dear' begins to spin. In between thanking many people for their inspiration and support, the band writes a heartfelt message, which is very uncommon from modern artists. It proves just how much a struggling band work on their sound and how all their efforts will be worthwhile if 'one person listening to the music on this cd feels for just a second some of the magic and fun we feel when we play it'. That sort of note is a sincere and welcome inclusion on any cd.

And as for the music itself? Whether it be a playful tune ('Don't Touch My Hair'), a unfeigned ballad ('A Kind Of Friend'), or a commanding instrumental ('Penultimate Whiskey'), The KB Band saunter through the album's duration with an indomitable appeal. John Earle wraps up the title track in an overcoat of funky proportions thanks to his great saxophone work.

Other notable contributions are Joanne Doherty's piano on the opening song and Ciara Allen's angelic vocals on 'Recollections Of Shannon' & 'Make His Day'. Allen helps make the two songs she appears on delectable and could easily find a place on any of the other songs with her exquisite voice. In contrast to this, Keith Burke's singing on the whole album is top notch. The drums, bass, guitar and harmonica all extol the band's talents but it is Burke's vocals that stand out above all else.

The guitars and drums on 'In Your Eyes', the honesty of 'Telephone Conversations' and snaking rhythm of 'Who You Are' all help to transform this record into something special. This band deserves your attention and this album deserves a home within your collection.