A review of her album 'High July' 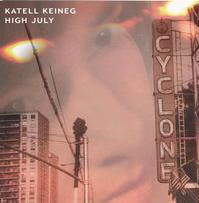 Review Snapshot:
A long-awaited return, but a frustrating and very ordinary record from someone who is capable of so much better.

Full review:
Raised in Wales of Breton stock, resident in Dublin and sometimes New York, Katell Keineg released two records in the mid-90s. Blessed with a stunning voice, her charming and poetic 1994 debut 'O Seasons O Castles' was followed in 1997 by the fabulous 'Jet', a near-perfect album of skyscraping ambition, playful eclecticism and literate songwriting.

Now, seven years later, Keineg finally releases her third album, 'High July'. While slow service is sometimes worth the wait (as with The Blue Nile's output of one album per two Olympics), in most cases the appetite of many years is spoiled by undercooked slop like that long-awaited second Stone Roses album. So, let's see what she has been doing for the
best part of a decade.

A couple of so-so recent EPs, 'What's The Only Thing Worse Than The End Of Time?' and 'Shaking The Disease', had punctuated the long wait, and the title tracks of both EPs are re-used on this album. The edgy 'What's The Only Thing...' opens the record. It begins promisingly with a great opening line ("I was born with millennium tension...") and a memorable hook, but its tense, brooding air is let down by its inane title/chorus lyric and clumsy middle section. The weedy and insubstantial 'Beautiful Day' also appeared on the 'What's The Only Thing...' EP. Pleasant but inoffensive, it's hard to see why it merited a re-issue on this album.

'Shaking The Disease' is a bland, up-tempo rock against commercialism - a protest song for people who consider 'Another Day In Paradise' a poignant, socially-aware polemic. It's demoralising to witness the fiery intellect that once wrote 'The Gulf Of Araby' reduced to a self-satisfied rant against the "crap" in her supermarket. Sadly, it's indicative of an artist who at this point in time seems to have nothing to say.

For most of this record Keineg hides her wonderful voice in a subdued, incoherent mumble, and the tedious washing-machine churn of electric guitars can't drown out the substandard songwriting on display here. The cool little guitar riff that opens 'High Marks' is repeated to death for the rest of this typically shapeless and flimsy song. It's a track that calls to mind the overwrought, amped-up introspection of Jeff Buckley, whose influence pervades much of this record. Elsewhere, American country-folk is evoked in 'Seven League Boots' (with the great Natalie Merchant somewhere in the backing vocals), a song as plodding and cumbersome as its title.

Some streaks of quality shine through. The prettiness of 'On Yer Way' survives the guitar mudslides, and 'Captain (Steal This Riff)' is a rolling, driving folk song that harks back to Keineg's joyous debut record. 'Little Joe', reminiscent of 'Sunny' by Bobby Hebb, is a delicate and charming ode to 70s B-movie actor Joe Dallesandro, and is one of the few tracks on this album to be allowed some breathing-space.

One brilliant song puts the rest of this album to shame. Continuing the noble tradition of songs about painters (David Bowie, Jonathan Richman and Keineg's own tribute to Leonor Fini on 'Jet'), the witty 'Brother Of The Brush' has Paul Gauguin telling of his re-incarnation as a cattle-ranching cowboy. The real treat is the jaunty melody and an unforgettable singalong chorus.

Such rare moments of inspiration emphasise how 'High July' is a disappointing and underwhelming record. Oh well. At least we have the next Blue Nile album to look forward to in 2012.