A review of her album 'Live' 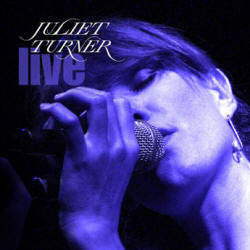 Review Snapshot: An engaqing live album from one of Ireland's relatively undiscovered talents.

Full Review:
Despite being named Best Irish Female at the 2005 Meteor Awards, I still believe Juliet Turner is one of Ireland's best-undiscovered talents. It's hard to believe it was 1996 when she recorded her debut album. Now almost a decade and three studio albums later, comes her first live CD, recorded over three nights last August at the Spirit Store in Dundalk.

The album opens with a brace of tracks from her most recent album, the best of which is the very underrated 'Vampires' (apparently dreaming of them, she explains, is a subconscious expression of sexual guilt...).

'The Girl with the Smile' is a refreshing new song. A pleasant ballad, probably factual, where she sings about "a snake in the grass", and hopefully this is a taster of what's to come from her forthcoming album.

I'm delighted to see that her sometimes forgotten debut album 'Let's Hear It For Pizza' is well represented here. Some of her best work is to be found on it and of the trio present here, the toe-tapping 'Dr. Fell' gets the crowd going, while the piano-influenced 'Pizza and Wine' bring out the best in her, vocally.

'Call Me Green', 'Rough Lion's Tongue' and 'Take the Money and Run' are the featured numbers from her second album, and the latter receives the biggest crowd reaction of the night and has the packed house in jubilant mood.

'Sweet Bride' (a traditional folk song she learned from Kate Rusby) and Lee Hazelwood's 'Sugartown' are the cover-versions offered from this live performance. The former is beautiful, the latter I'm afraid does nothing for me, and I do feel she would have been better revisiting her versions of 'Toxic' or 'A Winters Tale'.

Her decision not to include these, and the omission of commercial favourites like 'Burn The Black Suit' and 'Everything Burning is Beautiful' will decrease the chances of radio airplay for the album and for gathering an additional audience of younger fans, the very fans that will dictate how successful she becomes on these shores. Somehow I don't think Juliet will lose any sleep over that.