A review of his EP 'Jimmy Cole In Nashville'

This four track EP from the Dublin-based Mr. Jackson (who is also known to double up as a Cluas.com writer) is indeed very impressive. While the cover photograph is more likely to be found on a Robert Johnson CD, it suits the tone of the songs, songs which are soaked with political undertones and polished off with Americana finesse. 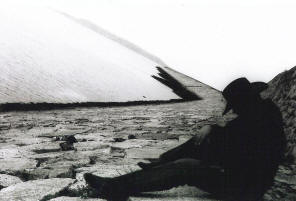 'Spent Rocker Blues' with its delicate guitar strumming, tells the story of a washed up rock star. The vocals - which I might add are so similar to those of Lou Reed it's scary - add a perfect sombre feel to the song. On 'Gunner Joe' the vocals differ slightly, resembling those of Steve Earle. The song itself is one that you could imagine Earle choosing to record with its simple acoustic storytelling of a soldier who dies in Iraq.

The title track 'Jimmy Cole In Nashville' is a classic country song with intelligent lyrics and easy guitar playing. 'Reeves County Jail' is a more upbeat track about a convict trying to go straight, a crooked lawyer and apologising for hurting his Mama. A great tune which David Allan Coe would probably describe as the ultimate country song (despite the absence of a mention of a train in the lyrics).

You are more likely to find songs of this calibre coming from more renowned artists like Steve Earle or Guy Clark but don't dismiss Jackson for his lack of publicity to date. He is an excellent songwriter, decent guitar player and superb singer, all of which are evident on this dynamic EP.