A review of her album 'Milk-Eyed Mender' 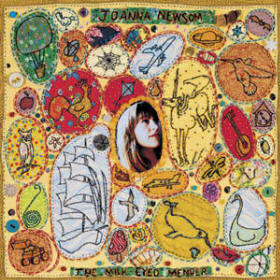 Review Snapshot:
An album of startling integrity, intelligence and insight, that bewitches, bothers and bewilders in equal measure.

Full review:
Well, where to start? I suppose the first point to be made is this: if "quirky" isn't your thing, and "odd" female vocalists (think Mary Margaret O'Hara, Stina Nordenstam or Nina Hynes) doesn't do it for you, then I seriously doubt this album will be one that you'd want to add to your collection. If, however, the notion of literate, playful, questioning lyrics, placed alongside a harp's accompaniment intrigues you, then this is the album for you.

This is an album with its own idiosyncratic form of the English language, one that borrows heavily from Chaucer-like 'olde-English'. This undoubtedly comes from (as she states herself) the "higher education" that she has received. It is this level of knowledge that she flaunts with mentions of Camus, and references to Barthes' work on semiotics. However, there is a conflict present in the lyrics, most obviously in the wonderfully tongue in cheek "Inflammatory Writ", in which she both questions and mocks the mythologising behind both the writing process and the "Great American Novel".

Her love of nature is obvious (witness the song titles), and on two separate occasions she urges the listener to pay attention to the world around them, most beautifully in "En Gallop": "Never get so attached to a poem / you forget truth that lacks lyricism".

One of the pleasures of listening to such a literate songwriter is that you broaden your horizons, and seek out references which might have passed over your head (which in this reviewer's case was rather a lot). However I am convinced that there are some more obvious references than others, and I'm hanging onto my conviction that the opening track is a melding of the Princess and the Pea, and the Biblical parable of King Solomon (and straight to Pseuds corner I go).

Thematically, sleep and water feature alongside nature, pointing to Newsom's grounding in the realities and mundanities of everyday life. Musically, the tunes are a delight, for example in 'Sadie' alone she moves from her highly individual style into a Negro spiritual one.

Her melodies are haunting and highly memorable, her lyrics are literate and witty, and her rhythms, rhyming patterns and phrasing are constantly changing - making for a challenging but highly rewarding listening experience.