A review of the album 'No Such Place' 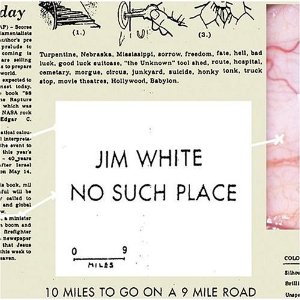 Jim White released his debut 'Wrong-Eyed Jesus' in 1998. The album was admired, as he admits in the sleevenotes to 'No Way Home' by "...all you weird people...". Included with the album's "11 dark little songs" was a 10,000 word diatribe of twisted, metaphysical genius in the sleeve notes. He had recorded that album with a maimed left hand after a band-saw accident and maybe that added to the morbid, surreal story-songs. Given that he was a professional surfer before spending some time as a model in Milan, that fact that he is now a gospel-country writer with Tom Waitsian sensibilities is not too much of a surprise.

His new record is, as is often the case with an artist's second release, similar in theme but with more expert and varied musicianship. The songs seem to be a reaction against a Deep South Pentecostal upbringing grinding against a deep-seated psychological scarring. The wonderful 'Wrong Kind of Love' opens with White intoning: "Nothing is prettier than a pretty girl digging a heart-shaped hole in the ground...". The production is languid and fluid and the song grooves along, its depravity smoothed by a lovely concoction of banjo, double-bass trip-hop.

Indeed, about half the album is produced by Morcheeba including the opener, 'Handcuffed To A Fence In Mississippi', a warped mutation on gospel country with a soaring chorus and angelic choir. Many of the songs, as in his debut, are stories regaling us in a world of Southern darkness. 'Wound That Never Heals' deals with an abused young woman who throws her murdered lover's body into a river wrapped in red velvet curtains that she had stolen from the local cinema... You just have to giggle.

Amongst my favourites is 'Ten Miles to go on a Nine Mile Road', another Morcheeba production. This tune rumbles along, with a fabulous riff and surreal lyric. A lovely sense of humour surfaces throughout. White's childhood in the Floridian swamps, a life of Bible-belt American repression, has moulded a truly original and cinematic sound. Like Terence Malick's Badlands on record...